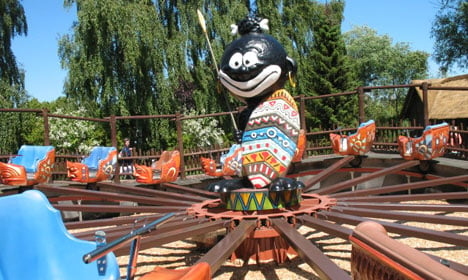 The "Hottentot Carousel" at Djurs Sommerland. Photo: Everyday Racism Project DK
A Danish theme park has been accused of racism for its “Africa Land” section that includes attractions like “The Cannibal Pots” and “The Hottentot Carousel”, but said Friday it would make no changes.
Djurs Sommerland in central Denmark opened the area in 1993 and said that up until this week, when an anti-racism group launched a petition, it had received no criticism for its Africa-themed rides.
The “Hottentot Carousel” — which uses a derogatory name for the Khoikhoi ethnic group — rotates around an outsized black man with thick lips, earrings and a bone through his hair, who is armed with a spear and a brightly coloured shield.
“We strongly urge you to reconsider your themed area 'Africa Land' since it involves extremely dated and racist caricatures of African tribal people and stereotypes,” the Everyday Racism Project DK wrote in a petition that on Friday had been signed by over 1,200 people.
“Your 'Cannibal Pot' ride adds to an oversimplified image of Africans as uncivilised and primitive,” it added.
The park's chief executive, Henrik Nielsen, said that although he respected that “people have different views”, no changes would be made to the rides.
“We won't change the names of the two rides in Djurs Sommerland that have been there for more than 20 years and by no means aim to offend anyone,” he told AFP.
Two “Keep the Hottentot Carousel” groups on Facebook had jointly garnered more than 9,000 “likes” from users who said the attraction was not racist and accused the petitioners of being politically correct. Some of the comments were overtly racist.
Likewise, a counter-petition entitled “We support Djurs Sommerland the way it is” had collected over 16,000 signatures by Friday – or nearly 14 times as many as the original petition.
The right-wing Jyllands-Posten daily, which in 2005 published 12 cartoons of the Prophet Mohammed that triggered violent protests in some countries, accused the Everyday Racism Project DK of seeking attention.
“What do you do when you want to draw attention to your organisation? You find something to be offended by,” it said in an op-ed.