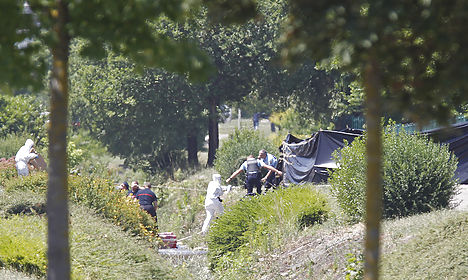 French crime scene investigators outside a gas company site near Lyon on Friday, where a decapitated head covered in Arabic writing was found. Photo: REUTERS/Emmanuel Foudrot/Scanpix
Denmark’s functioning prime minister, Helle Thorning-Schmidt, offered the nation’s condolences to France after the country experienced its second terror attack in six months on Friday.
For all the latest on Friday’s attack, visit The Local France
“This morning there was an atrocious terror in France. I have personally expressed my deepest sympathy to to President Hollande. It is unbearable that France has again been hit by terror,” Thorning-Schmidt said from Brussels, where she was attending a top-level EU summit.
“I know that all of the Danes’ thoughts and sympathies are will the bereaved and with all of the French people, whom have our full support. We know what France is going through at this time,” she continued, referring to the February shootings in Copenhagen that left two dead.
Thorning-Schmidt, who continues to serve as the nation’s prime minister as Lars Løkke Rasmussen continues negotiations to form a new government, added that the Danish authorities were following the situation closely.
Following Friday’s attack in the French city of Lyon, in which a suspected Islamist beheaded a man at an industrial gas factory, armed guards were posted outside the French Embassy in Copenhagen.
The Lyon attack was just one of three to occur worldwide on Friday, with at least 27 gunned down at a beach resort in Tunisia and 13 killed in a suicide bombing in Kuwait claimed by Islamic State extremists.
According to the Foreign Ministry, no Danes were directly affected by any of the day’s tragic events.
Denmark’s outgoing foreign minister, Martin Lidegaard, said the nation is lending its full support to all three involved countries.
“We stand shoulder to shoulder with France, Tunisia and Kuwait and the rest of the world against terror and extremism. The Foreign Ministry is following the situation closely,” he said.

PARTNER CONTENT
Would your career benefit from an EMBA?

PARTNER CONTENT
Why France is the place to build your business career
Url copied to clipboard!