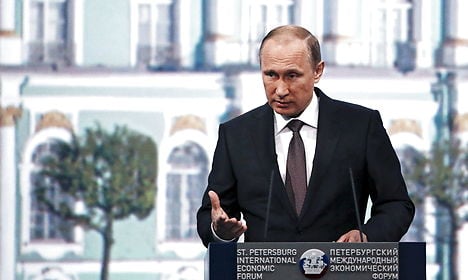 Russian President Vladimir Putin. Photo: Grigory Dukor/Scanpix
Some 33,000 Russian soldiers rehearsed a military takeover of the Baltic Sea area on March 21st to 25th, including practising the seizure of Gotland off Sweden's east coast, Danish island Bornholm, Finland's Swedish-speaking Åland islands and northern Norway, security expert Edward Lucas writes in a new report for US-based Center for European Policy Analysis (Cepa).
“If carried out successfully, control of those territories would make it all but impossible for Nato allies to reinforce the Baltic states,” his report, titled 'The Coming Storm', claims.
Lucas’s report also details Russia’s simulated attack on Bornholm in June 2014, which took place when the island was packed with attendees of the annual political festival Folkemødet.
See also: Russia simulated an attack on Denmark
“Russia mounted a dummy attack, using planes armed with live missiles, on the Danish island of Bornholm just as 90,000 guests—in effect the country’s entire political elite—were visiting the island for the Folkemødet public policy festival. Had the attack actually taken place, Denmark would have been decapitated,” Lucas writes.
The revelation of a second military exercise aimed at Bornholm will do little to improve Denmark’s tense relationship with Russia. At the same time the Russians were carrying out their military rehearsal, Russia’s ambassador to Denmark, Mikhail Vanin, wrote in an opinion piece published by Jyllands-Posten that Denmark has made itself a target of a potential nuclear attack by joining Nato’s missile defence system.
See also: Russia delivers nuclear threat to Denmark
“I don’t think the Danes fully understand the consequences of what will happen if Denmark joins the American-controlled missile defence. If it happens, Danish war ships will become targets for Russian atomic missiles,” Vanin wrote.
There have also been several incidents of Russian airspace activity over and near Denmark.
In addition to the two Bornholm incidents, a Russian military jet nearly collided with a SAS passenger plane out of Copenhagen in December, while in March of last year a Swedish SAS pilot said his plane was “just seconds” from crashing into a Russian jet.