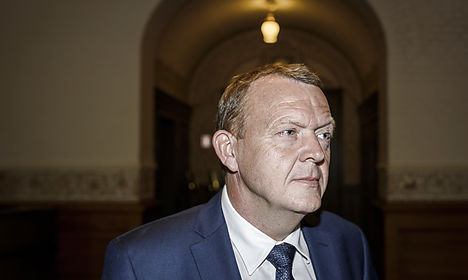 Lars Løkke Rasmussen will have to accommodate both DF and Liberal Alliance. Photo: Jeppe Vejlø/Scanpix
Venstre's Lars Løkke Rasmussen, tasked with forming the country's next coalition government, said Wednesday that talks with the anti-immigration Danish People's Party (DF) were “difficult”.
“Everything is going according to plan but it's also difficult, because we don't agree on everything,” Rasmussen told public broadcaster DR.
The country's right-wing bloc ousted the centre-left coalition led by Helle Thorning-Schmidt in elections last week, and Rasmussen is in his sixth day of consultations to form a government.
He was selected to become prime minister despite Venstre finishing in third place with 19.5 percent of the vote, behind Thorning-Schmidt's Social Democrats and the far-right DF, which saw support jump to 21.1 percent from 12.3 percent.
Rasmussen, who also served as prime minister from 2009 to 2011, said the level of public spending was a major stumbling block in talks with the pro-welfare DF, with whom it aims to form a minority government.
Venstre wants to keep public spending unchanged over the next four years while DF wants to raise it by 0.8 percent — more than was pledged by the leftist Social Democrat campaign.
On Sunday, Rasmussen ruled out forming a majority right-wing coalition, an unlikely scenario since it would have had to include both DF and the libertarian-leaning Liberal Alliance party, which wants to cut welfare spending.
Although they are unlikely to end up in an official coalition, Liberal Alliance's party leader, Anders Samuelsen, reminded Rasmussen in no uncertain terms that a centre-right government will need the support of LA to advance its agenda.
“I am in the lucky situation in which I can ask how many mandates the Danish People's Party and Venstre have together. It isn't 90,” he told TV2, referring to the number needed to reach a parliamentary majority.
Samuelsen said that his party will press hard for tax relief for the country's highest earners in order to lend their support to an eventual Rasmussen-led government.
Rasmussen said that although voters had “sent clear signals” that they prioritised welfare, healthcare and care for the elderly, any agreement with DF would have to follow “the direction I have set… even if I know that it will be at a different pace than if I could decide for myself”.
DF leader Kristian Thulesen Dahl also sounded a pessimistic note after leaving Wednesday's talks.
“I don't think we have come any closer to any real clarity on where this will land,” he told news agency Ritzau. “There are some major things we need to tackle.”
DF — which campaigned on tighter immigration rules, higher pensions for low-income earners and more money for healthcare and the elderly — has given previous conservative governments parliamentary support. But analysts say its new clout poses a dilemma for the party since staying
outside government risks disappointing many voters, while assuming government responsibility could also make it less popular in the long run.
Rasmussen began consultations on Saturday after a formal request from Queen Margrethe II to form a government.