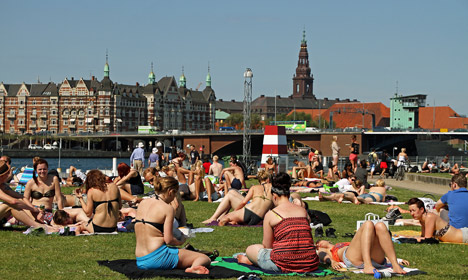 By now, most of us have already forgotten that Denmark can also look like this. Photo: Colourbox
After a colder-than-normal May and a June that is on track to be the coldest in 24 years, summer weather may finally be on the way.
Meteorology institute DMI said on Thursday that the chilly and rainy conditions that have characterized the Danish summer thus far are finally moving out. By early next week, there should be sunshine, clear skies and warmer temperatures.
“It will be very nice from Tuesday or Wednesday, when we will have temperatures around 25 degrees and sun and summer. Aside from Tuesday, when there may be a few clouds remaining, there will be sun from morning until evening,” DMI’s Jørn Thomsen told Berlingske on Thursday.
While the change in weather has been a long time coming, an optimist might say that it arrives at precisely the right time. Next week is the first week of summer holiday for Denmark’s school children and the nation’s largest music festival begins in Roskilde just as the summer weather is expected to hit.
DMI had previously said that the summer warmth would come in the first week of June and although they were wrong that time, Thomsen said he is nearly certain that they’ve gotten it right here a month later.
“I cannot imagine that it doesn’t come. But of course, we saw that the opinion polls prior to the election set us up for a surprise and the same could happen here,” he said.
DMI wasn’t prepared to say just how long the much-anticipated summer weather would stick around but Thomsen said that at least five consecutive days beginning on Tuesday or Thursday is a “relatively safe” bet.