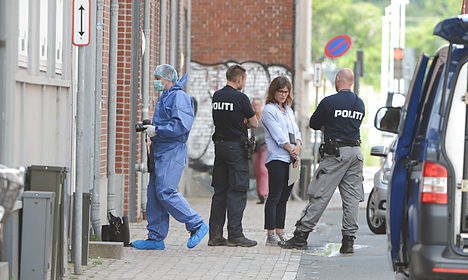 The 24-year-old woman was killed outside her home. Photo: Sonny Munk Carlsen/Scanpix
Denmark is having a discussion about mental health after a 48-year-old snapped on Tuesday and stabbed a 24-year-old woman to death in her own backyard in Odense.
The man, identified only as PN, has admitted to the gruesome killing.
“I took a fillet knife and went down and stabbed her in the abdomen and breast region and then slit her throat,” the man said in a preliminary court appearance according to BT.
The man, who is on sick leave from his job as a school teacher, explained his actions by saying he has felt “harassed” by his boss and others in recent months. He said that the mere sight of the woman, whom he did not know, also “harassed” him, causing him to lose control.
“I stuck my head out of the [car, ed.] window yesterday and I felt like she was harassing me. So I went in and got the knife and went down and committed the murder. I felt thoroughly harassed by my boss until yesterday and then I did this thing,” he said.
According to BT, the man has been in treatment for paranoia and psychosis since 2003 while continuing to work full-time as a school teacher until his sick leave six months ago.
PN expressed remorse for his actions but insisted that he had been harassed over a long period.
“What I have done is terrible for the family and so on. I understand that because of my diagnosis it’s easy to believe that it is psychosis talking when I say that I have been harassed, but it is not,” he said.
Forensic psychiatrist Henrik Day Poulsen told BT that it is likely that PN was not taking his prescribed medicine and that people with ailments such as PN’s often feel that the world is out to get them.
“If one doesn’t get their paranoid psychosis treated it can be very unpredictable. It can suddenly flare up and it can be a completely random man or woman on the street that sets off a chain of thoughts within the [paranoid] individual. Without medicine, this is definitely a dangerous condition,” Poulsen said.
Poulsen said it is a “gigantic problem” that so many mentally ill people stop taking their prescribed medicine once they are released from treatment.
“In Denmark, one cannot treat patients against their will outside of a hospital. The moment they are released, they can basically stop taking their medicine. Those are the rules. That is what we are fighting against within psychiatry – convincing people that they actually need to take their medicine,” Poulsen told BT.
PN will be held in custody a psychiatric unit for the next four weeks before his case moves forward.