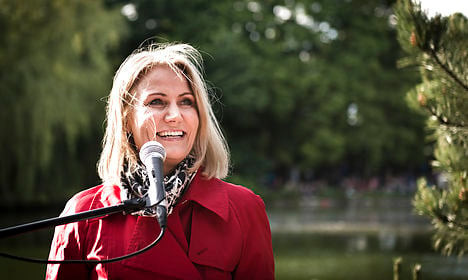 Outgoing Prime Minister and Social Democrat MP Helle Thorning-Schmidt will be representing Denmark in lieu of any better alternatives at the upcoming EU summit on Friday, the Prime Minister's Office told Ritzau.

Until Venstre leader Lars Løkke Rasmussen succeeds in forming a new government, Thorning-Schmidt remains a formal chief representative of Denmark in the EU despite no longer being Denmark’s Prime Minister.

Thorning-Schmidt is also no longer the leader of the opposition, as she has also resigned from her role as party leader of the Social Democrats.

The Prime Minister’s Office told Ritzau that it was not able to comment on what kind of a mandate the former PM would have in Brussels, but that the alternative would have been an empty Danish seat at the summit. Queen Margrethe could technically also represent Denmark, but the Royal House has said that she would not attend.

The EU summit will be tackling three difficult topics, two of which were also hotly debated during the election.

In addition to the Greek debt situation, the summit will explore possible solutions to the Mediterranean refugee crisis and the British ambition to reform the EU.

Immigration and asylum were major themes throughout the recent election, with Rasmussen’s blue bloc campaigning on implementing tighter restrictions.

The four parties in the blue bloc also announced that they will support David Cameron’s desire to reform the EU to help combat ‘welfare migration’, in which EU citizens move to states with more generous unemployment benefits.

While the blue bloc is likely to move forward on both those agendas once a government is formed, there is still no end date in site for when that will happen.

Danish People’s Party (DF) leader Kristian Thulesen Dahl told DR on Wednesday that he has not ruled out that his party will form a coalition with Venstre, but that negotiations may drag on for a while, noting that he still had “concerns” about joining a Venstre-led government.

“If we are to join a coalition, we need to see Venstre in particular accommodate our wishes so that we can demonstrate that being in government is where we will get the most political influence. We have yet to agree on key issues that would enable us to go back to our own people [supporters, ed.] and say that it is a good idea for us to join the government,” he told DR.

“Until we can see that, we will not be joining a coalition,” he added.

Rasmussen wrote on Facebook on Wednesday that he would spend the day negotiating with DF, Liberal Alliance and the Conservatives.

“Regardless of the make-up of a new government, it is important that it has a clear direction (both welfare AND prosperity) and is manoeuvrable in a parliament where I sense that many [MPs] actually want a constructive cooperation in Denmark's best interests,” the incoming PM wrote.