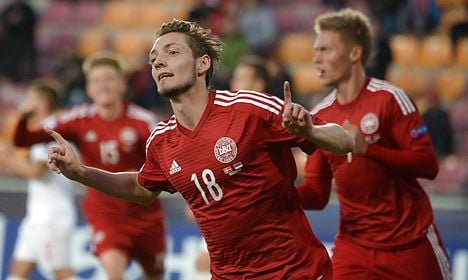 Denmark's Rasmus Falk celebrates after scoring during final tournament of the UEFA Under21 European Championship 2015 group A match between Denmark and Serbia on June 23, 2015, in the Letna stadium in
Denmark reached the semi-finals of the European Under-21 Championship in the Czech Republic after taking the top spot in Group A on Tuesday.
Denmark won the group with six points from three games after beating Serbia 2-0 in Prague.
With the victory, Denmark secured a spot in the 2016 Olympics in Rio de Janeiro, the first time that the country will play Olympic football since the 1992 Games.
Germany came second in the Euro U21, with five points after being held to a 1-1 draw by third-placed hosts the Czech Republic.
In Group B, all four teams can still make it to the semi-finals scheduled for June 27.
Group B leaders Portugal are due to face second-placed Sweden in the last group game on Wednesday, while third-placed England face Italy.
The final is scheduled for June 30.