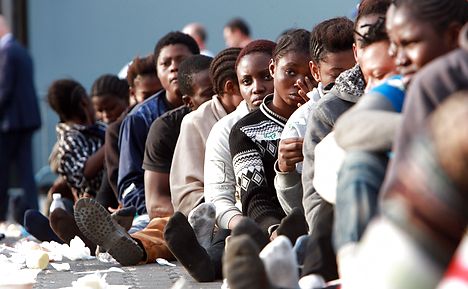 Danish ships have rescued some 5,000 asylum seekers since last year. Photo: GIOVANNI ISOLINO/Scanpix
A ship from Danish firm Torm received a distress call from the Italian Coast Guard on Sunday asking it to come to the assistance of two jam-packed rubber dinghies that had run into problems off the coast of Libya.
The Torm Arawa crew came to the aid of the boats and was able to rescue all 222 passengers, all of whom were trying to make their way to Europe to seek asylum.
“The dinghies were crammed with people and there wasn’t much space so it was a good thing that they were picked up by us, where they received food and water,” Torm spokesman Jesper Jensen told broadcaster DR.
The asylum seekers remained on board the Torm ship for around 30 hours before the Danish company delivered them to Port Reggio Calabria per instructions from the Italian authorities.
“I am pleased that our capable crew acted according to procedures and saved so many lives, reflecting outstanding commitment to international maritime laws and humanitarian efforts,” Jensen said in the company’s press release.
According to DR, Danish transport ships carried out 11 rescue missions in 2014 and ten already this year, rescuing nearly 5,000 asylum seekers. Some 500,000 asylum seekers are expected to make their way across the Mediterranean toward Europe in 2015.
Because of Denmark’s opt-out on EU Justice and Home Affairs, the country will not be a part of the EU’s joint efforts to combat human smuggling across the Mediterranean nor the plan to more evenly distribute refugees across member states.
See also: Denmark's 'sad' position in EU asylum plan
Denmark’s outgoing foreign minister, Martin Lidegaard, last month said it was “very sad” that Denmark will not be a part of the EU’s shared solution to the migrant crisis.
Following last week’s election, in which the eurosceptic Danish People’s Party (DF) brought the ‘blue bloc’ of parties into power, one of the major sticking points between DF and presumed new PM Lars Løkke Rasmuseen’s Venstre party is Denmark’s relationship to the EU.
While Venstre has previously said it would advocate replacing Denmark’s opt-out with an ‘opt-in’ model, DF would rather see Denmark have more sovereignty over national issues. Even if Danes approve the opt-in model in a referendum that will be held no later than March 2016, it will not include an adoption of the EU’s asylum and immigration polices.
See also: Denmark lays foundation for ending EU opt-out
Rasmussen and Venstre secured the right to veto any future acceptance of European immigration and asylum legislation.
“We have agreed that we will not accept certain parts [of EU legislation, ed.] and if someone should get that idea in the future, we have the right to veto. On behalf of Venstre, I can guarantee that we will not join in,” he said in March.