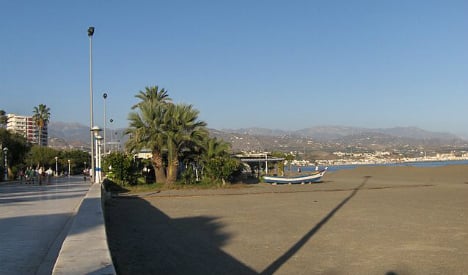 The body of a Danish tourist was found in the Spanish holiday resort of Torre del Mar. Photo: Tyk/Wikimedia

Spanish police are investigating the death of a Danish tourist, who was found dead with signs of violence in a popular tourist spot on the Malaga coast.

The woman’s husband, also a Danish national, raised the alarm at the reception of the four-star BQ Andalucía Beach Hotel, in Torre del Mar, on Sunday morning.

He went to reception at 9am and told staff his wife was having trouble breathing, hotel director, Andrés Guerrero confirmed to local newspaper, Malaga Hoy.

When hotel staff went up to the fifth floor room with the 50-year-old Danish man, they discovered his wife´s dead body lying on the bed and immediately called police and an ambulance.

Sources close to the investigation confirm that the woman had bruises and wounds and that there was blood on the bed sheets. The body appeared to have been dead for some time and the room was disorganized and messy.

The woman’s husband appeared disorientated and nervous, including exhibiting signs of drunkenness, the same source confirmed.

The husband was arrested and is due to appear before a judge on Monday or Tuesday; police are investigating whether the death was murder.

The woman was found in a hotel in Torre del Mar on Spain's southern coast.

The woman’s body was taken to Malaga’s Institute of Forensic Anatomy where an autopsy will be carried out on Monday to clarify the cause of death.

The couple checked into the hotel on Saturday without having made a reservation. They were accompanied by a third person who took a separate room and all three were due to check out on Sunday.

The Danish foreign ministry has confirmed the reports to the Danish press.