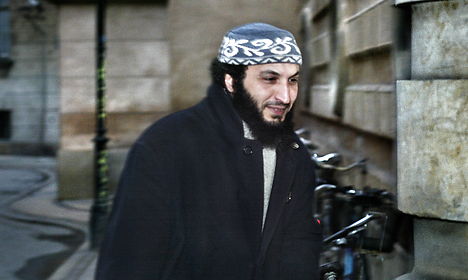 This is the second terror conviction for Sam Mansour, shown here in 2003. Photo: Rune Feldt/Scanpix
Sam Mansour, who has been dubbed ‘The Bookseller from Brønshøj’ and ‘al-Qaeda’s PR man in Denmark’ was found guilty of inciting terror by the Eastern High Court on Monday.
The conviction upholds a December decision in Frederiksberg City Court in which the 55-year-old Danish-Moroccan was convicted for posting online threats, screeds, photos, links and messages that praise Osama bin Laden and call on his readers to join al-Qaeda’s al-Nusra front. Mansour has also posted videos of soldiers being executed in Syria and Iraq.
See also: Morten Storm gives fiery testimony in terror case
While the December decision saw Mansour acquitted on charges related to the editing and publishing of three books that were seen as terrorist propaganda, he was also convicted of those charges by the higher court on Monday.
This marks the second time that Mansour has been convicted on terror charges. Mansour’s 2007 conviction marked the first time in Danish history that an individual was convicted of inciting terrorism. He served 3.5 years in prison on the previous conviction.
The big question now is whether Mansour will become the first Dane to be stripped of his citizenship for criminal offences. The Eastern High Court will now decide whether to rescind Mansour’s citizenship and expel him from Denmark.
In the December decision, the Frederiksberg City Court rejected the prosecution's call for Mansour to lose his Danish citizenship and sentenced him to four years in prison.
His lawyer, Thorkild Høyer, said that he was not surprised by the High Court’s decision on Monday.
“I’m disappointed by the high court’s decision but not particularly surprised. Now we will have to wait and see if the high court goes against the city court’s decision when it comes to my client’s citizenship and his right to reside in Denmark,” Høyer told Berlingske Nyhedsbureau.
A decision on Mansour’s citizenship is expected no later than July 1st.
Url copied to clipboard!