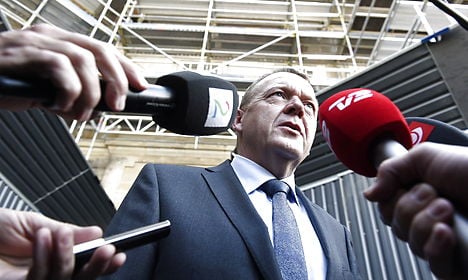 Lars Løkke Rasmussen will go back to the queen on Monday to seek a mandate to form a minority government. Photo: Søren Bidstrup/Scanpix
Lars Løkke Rasmussen of the centre-right Venstre party said Sunday he would form a minority government after a vote that brought the Danish right to power.
Denmark's Queen Margrethe II asked the prime minister-elect to “explore the possibility of forming a [majority] government with several parties,” Rasmussen told public broadcaster DR.
“I honestly tried to fulfil that task, but I realised it was not possible” after meetings with several party leaders, he said.
See also: Rasmussen begins government negotiations
Rasmussen added that he would hold a second meeting with the monarch on Monday to obtain an official mandate to form a minority government.
During the election campaign, other smaller right-wing parties had already announced they would not necessarily join a coalition government with Venstre.
Rasmussen's announcement came amid speculation following Thursday's vote over whether the centre-right would form a coalition government with the anti-immigration Danish People's Party (DF).
While DF actually won more votes than Vestre, making it the second-biggest party in parliament after the Social Democrats, it has repeatedly said it would not join a coalition unless it could be sure to play an influential role.
The two most likely scenarios now, according to Berlingske, are that either Venstre will form a government alone, or it will ask DF to join in.
In exchange for joining a coalition, DF has demanded greater restrictions on immigration and raising public spending — which Venstre wants to bring down.