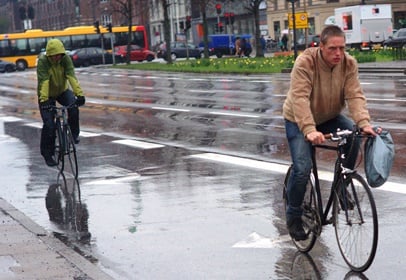 A little rain is no excuse to leave the bike at home though. If you're Danish, at least. Photo: Sigfrid Lundberg/Flickr

An Arctic cold front will be making its way over Denmark from the northwest, making the sun an infrequent guest across large parts of the country over the weekend, the Danish meteorological institute DMI said.

“Showers are expected particularly in the southern parts of the country tonight,” DMI said, adding that the weather will continue throughout Saturday and Sunday as well.

“Saturday will entail intermittent showers with occasional sun in most areas of the country,” while Sunday will be “mostly cloudy at first, but some sun in most parts later in the day,” the institute reported.

Daytime temperatures are expected to range from 13C to 20C, however, with Saturday being slightly warmer.

The weather will continue well into next week according to the institute, which bodes ill for the Danish midsummer celebration Sankthans, known in English as St. John’s Eve.

Danes traditionally gather in parks and beaches to celebrate the event around a fire, which this year will be hard to light due to expected rain showers,

According to both DR and DMI, the cool and unstable weather has taken hold and will continue for the foreseeable future, and temperatures are unlikely to surpass 15-18 degrees throughout the week.