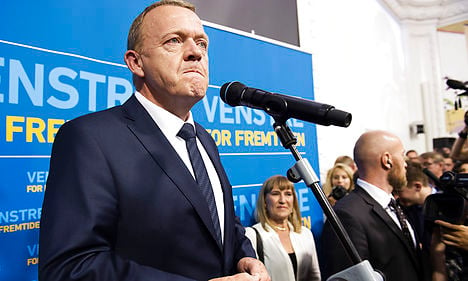 An emotional Rasmussen thanks his supporters. Photo: Claus Bech/Scanpix

“The coming days will determine whether it will be possible to build a majority for a (government) platform that will lead Denmark down the right path,” Rasmussen told cheering supporters after the election results came in.

Rasmussen, 51, is a seasoned political operator with over 20 years in parliament. His jovial charm has often gone down better with voters than the more formal approach of his adversary, outgoing Social Democratic Prime Minister Helle Thorning-Schmidt.

But expenses scandals and an improving economy appear to have damaged his Venstre party, which garnered 19.5 percent of votes amid surging anti-immigration sentiment in the Scandinavian country.

See also: Løkke: 'We have a problem with integration'

The far-right Danish People's Party (DPP) won a record 21 percent of votes on Thursday and superseded Venstre as the country's biggest right-wing formation.

However, it was not yet clear whether the DPP would choose to enter government, or prefer to influence its policy by providing informal support in parliament. Rasmussen became Denmark's youngest prime minister in 2009 when then-leader Anders Fogh Rasmussen (no relation) stepped down to become NATO Secretary General.

But he lost the 2011 election when voters rejected his government's austerity policies.

Despite the defeat, which ended a decade of conservative rule, Rasmussen held on to the party leadership and has since survived a series of relatively minor expenses scandals, which nonetheless hit his popularity ratings.

“Of course Danes see him as problematic, but on the other hand they see him as a really professional politician,” Peter Nedergaard, political science professor at the University of Copenhagen, told AFP.

Rasmussen was born in 1964 in the central Danish town of Vejle to an accountant father and a stay-at-home mother. He entered parliament 30 years later after graduating from law school and working as a consultant.

In 1998 he became a mayor in the eastern county of Frederiksborg, and took over as deputy chairman for the Venstre party.

When the party took power in 2001, he was appointed interior and health minister, and in 2007 became finance minister, seen as the natural successor to Anders Fogh Rasmussen.

In 2009, at the age of 44, he became the youngest prime minister in Danish history — but there was little time to celebrate.

The country was in the grips of its worst economic crisis since 1945 on the back of a collapse in house prices and plunging domestic consumption.

When she called the election three weeks ago, the prime minister attacked Rasmussen's continued commitment to austerity and pledges to freeze public spending, which she said would “mess up” the recovery her government had achieved.

He also came under fire for claiming that unemployed Danes lack financial incentives to find work.

Rasmussen fought back by talking tough on immigration, but voters leaning that way clearly cast their ballots for the DPP as rising numbers of asylum seekers became one of the top issues of the election.

Political analysts said the Copenhagen terror attacks in February were not a direct campaign issue, but helped to keep immigration on the agenda.

Gunman Omar El-Hussein killed a Danish filmmaker outside a cultural centre before opening fire at a synagogue, killing a Jewish man, in twin attacks that shocked the country.