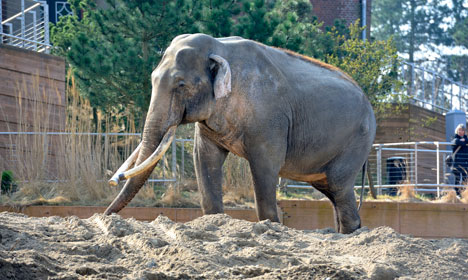 One of the strategies to get animals to move more is to bury the elephants' food. Photo: Colourbox
If the animals at the Copenhagen Zoo seemed a little lethargic the last time you visited, perhaps its because they’re worn out from carrying around too much weight.
So many of the zoo’s animals are overweight that officials are now implementing a new diet and exercise routine in an effort to shed those extra pounds.
“We have had a lot of fat animals. Fat monkeys, fat elephants and fat cows. Basically all of the animals except the birds,” Copenhagen Zoo spokeswoman Tine Mangart Søland told Berlingske Nyhedsbureau.
The extra girth can be attributed in part to the animal’s sedentary lifestyle while in captivity, which not only is bad for keeping off the extra weight but also not particularly good entertainment value for the zoo’s visitors.
Søland said that zoo staff is coming up with new ways to get the animals, some of which are fed up to eight times a day, to move around a bit more.
In an effort to make the animals more active and thus a bit slimmer, zoo workers are spreading their food throughout their enclosures and finding creative ways to make the animals work harder to meet their own needs.
For example, lions will now have to climb a tall tree trunk to get their food while elephants will have to dig for theirs.
“We need to constantly find new ways of getting the animals to move so that they can use their natural behaviour,” zoo biologist Katrine Friholm told Berlingske.