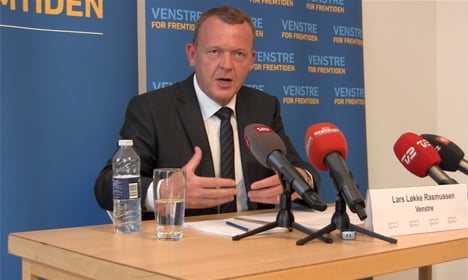 Opposition leader Lars Løkke Rasmussen was forced to tackle a series of critical questions from the international press over the tone used in the election’s immigration debate.

Rasmussen kicked off the Monday press conference at the International Press Center with an opening statement that also touched on Venstre’s ambitions on immigration and asylum policy should he become Denmark’s next PM on June 18th.

“We want to get a grip on the immigration policy so that the influx of asylum seekers and people coming here through family reunification is brought under control,” the Venstre party leader said.

As the floor was opened up to questions, many of them concerned how much of the electoral rhetoric in the past weeks had focused on tightening restrictions to immigration and asylum.

When asked why it was so important to make Denmark less attractive to refugees when there are 50 million displaced persons in the world today, the opposition leader stressed that Denmark is already having difficulties with the refugees already here.

“The reason why is that we have a problem with integration in our society. We need to be open and honest about this. If you look at the current situation, almost 50 percent of people in Denmark of a non-Western background are on some kind of public support,” he explained, also noting that the number of asylum seekers had quadrupled since 2011 when he was Prime Minister.

Rasmussen was also asked to offer his opinion on why the climate of the debate on immigration was “totally different” than in Sweden, and almost “racist” in comparison.

“We have a very robust debate about these questions in Denmark. It is absolutely OK from my point of view to talk honestly about the situation. If you want to live in Denmark, you should contribute to Denmark and share our common values,” he replied.

When asked by The Local why the Danish immigration debate is so often bereft of nuance, Rasmussen said “it is important to make a distinction between refugees and immigrants”.

“I define Denmark as an open society and I welcome people from all over the world if they contribute to our society,” he said.

“You can’t hide from reality and it is a reality that we face some problems. We must insist on having nuances in the debate where we can be open about the problems and talk about Danes with a foreign background in a positive way,” Rasmussen said.

After the barrage of questions on the themes of immigration and refugees, Rasmussen finally managed to steer the conference towards other topics, including the EU and Venstre’s intention to support David Cameron in his renegotiation of the UK’s cooperation with the Union – which was also fundamentally based on an ambition to reduce the number of foreigners on benefits.

See also: Danish opposition vows to back Britain in EU

“We need to strike a new and better balance between the European Single Market, the freedom to move, and every country’s ability to protect their own societal model, so to speak,” Rasmussen said.

He added that he called David Cameron last week after a joint announcement in which Venstre and fellow opposition parties Danish People's Party, the Conservatives and Liberal Alliance said that they would back Britain's efforts to make sure the EU doesn't become “a social union”.

“The British situation could be a stepping stone to finding a better solution and that would be in the core Danish interest for two reasons: both to keep Britain in the EU and to protect our social profile,” Rasmussen said.

Rasmussen finished off the press conference by saying that if next week's election goes his way, he would not rule out any possibilities when it comes to forming a government even if that meant going it alone with Venstre as a one-party minority.