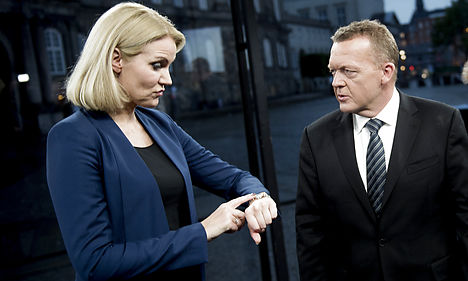 PM Helle Thorning-Schmidt and rival Lars Løkke Rasmussen both argue that Denmark's recovery occurred on their watch. Photo: Keld Navntoft/Scanpix
With the race too close to call, Prime Minister Helle Thorning-Schmidt and opposition leader Lars Løkke Rasmussen, who governed from 2009 to 2011, are both claiming credit for a resurgent economy in increasingly heated debates.
After a bursting of the real estate bubble in 2008, house prices fell by 20 percent and private consumption tumbled, with Danish households left with the highest debt burden in the world.
But in 2015 the government raised the growth forecast to 1.7 percent, and believes the economy will grow by a whole two percent next year.
On May 27, the same week her government declared an end to the economic crisis, Thorning-Schmidt called the election.
“My policies have secured this [recovery]. It annoys me if you are going to mess it up with your experiment,” the prime minister said last week, referring to her rival's pledge to freeze public spending and cut social benefits.
“I have to answer this rant… It seems your memory begins when you became prime minister,” retorted Rasmussen, leader of the right-of-centre Venstre party.
When Social Democrat Thorning-Schmidt took office, she disappointed some of her voters by cutting taxes and maintaining some the unpopular policies of her right-wing predecessor, who had slashed the unemployment insurance (dagpenge) period from four years to two.
The recent recovery helped Thorning-Schmidt bounce back in the opinion polls after a mostly unpopular tenure, just weeks before the June 18 vote. But experts say growth has little to do with policy and more to do with rising demand in export markets.
The economy is improving “because we're beginning to feel the global upswing. Denmark is a relatively open country and we live off exports to a high degree”, said Frank Skov, chief analyst at the Cevea think-tank.
Exports account for just over half of gross domestic product (GDP), with Germany, Sweden and Britain among Denmark's biggest markets.
Denmark posted its seventh straight quarter of growth in the first three months of the year, and unemployment stood at 4.8 percent in April, its lowest in nearly six years.
Skills shortage
However, even as companies step up hiring, Danish businesses claim the country cannot afford its costly unemployment benefits, which are generous even by Scandinavian standards.
Rasmussen recently came under fire for claiming some Danish workers on unemployment benefits would hardly gain anything from taking a job, but on the right many people agreed with him.
“Some of those receiving social benefits aren't taking the jobs available because the gain is too small,” said Mads Lundby Hansen, chief economist at right-leaning think-tank Cepos.
“You can see this from the great Danish paradox whereby we have tens of thousands of eastern Europeans on the Danish labour market and at the same time over 100,000 unemployed.”
According to Hansen, those receiving the highest benefits have no incentive to take on jobs paying 117 kroner (16 euros, $18) an hour, as they would lose 400 kroner a month.
Some firms were already being squeezed by the combination of an ageing population, low unemployment, and high benefits, he claimed.
“Companies have begun saying that they lack labour and looking forward we can see that they will have to turn down orders because they can't fill vacancies,” he said.
Those views are echoed by the Confederation of Danish Industry (DI), which wants to see unemployment benefits capped.
Skov of the leftist Cevea think-tank said German data suggested that cutting welfare would only lead to employers slashing pay for the lowest earners.
“Around 16,000 people work in Denmark even though they would get more from being on social assistance. Working means much more” than just getting paid, he said.
Foreign labour
A potential labour shortage has also made DI the leading proponent of easing requirements for foreigners to move to Denmark for work.
“We would like to see better access to foreign labour,” said DI's chief economist Klaus Rasmussen, who is not related to the prime minister's electoral rival.
If Venstre's leader Rasmussen wins the election, he will have to govern with the support of the anti immigration Danish People's party.
He has proposed lowering the minimum wage required for a Danish work permit, but only for citizens of countries considered economically and culturally similar to Denmark, ruffling feathers on the left.