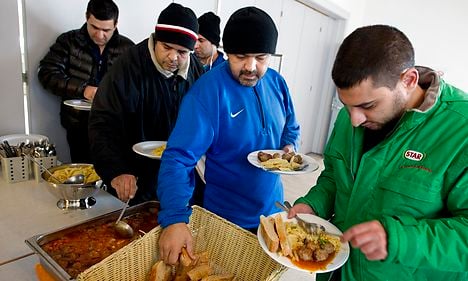 Asylum seekers at a center on Jesingø. Photo: Morten Stricker/Scanpix

More than four out of every ten refugees and their family members who have come to Denmark through family reunification fail to pass the Danish language course offered by the government within its three-year timeframe, according to Rigsrevisionen, which audits public spending in Denmark.

All foreigners with valid CPR numbers are offered to take part in a Danish language course upon arrival in Denmark, which entails at least 15 hours of study per week.

Attendance is not mandatory however, and the 53,784 course registrants missed a combine one third of their classes in 2013. Among foreigners on the two different types of unemployment benefits (dagpenge and kontanthjælp), the absence rate is a bit higher at 39 and 36 percent, respectively, according to a 2013 government report.

The head of the Danish Language Centers, Poul Neergaard, is aware of the issue but argues that local municipalities are partly responsible for the lack of motivation among job-seekers in particular.

“We are just an offer, and many prioritize their jobs instead. The same is true for those who are on unemployment benefits, whose local municipalities prioritize getting them into the labour market rather than attending the [language] courses,” Neergaard told MetroXpress.

Several politicians have commented that the findings indicate a major problem that needs to be addressed in order to ensure that more foreigners learn to speak the language. Socialist People’s Party MP Karin Lorentzen was surprised by the high failure rate.

“That is really poor. It is, after all, a fundamental prerequisite for being a Danish citizen,” she told MetroXpress.

“We must terminate their benefits if they do not participate in the language courses, and a doctor’s note should be required if they are absent for prolonged periods,” he told TV2.

The poor language school results come mere months after an analysis from the Confederation of Danish Employers (Dansk Arbejdsgiverforening) showed that three out of four refugees who came to Denmark in the early 2000s were jobless a decade later. The head of the organization said that the Danish government has “truly failed” in its efforts to get refugees working.