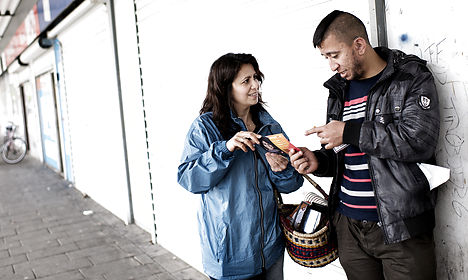 Özlem Cekic canvassed the Tingbjerg neighbourhood north of Copenhagen, where voter turnout is traditionally low. Photo: Bax Lindhardt/Scanpix
As Thursday’s general election quickly approaches, much of the political discussion has centred around the place of foreigners in Danish society.
Public opinion polls suggest almost one in five Danes, or some 18 percent, will vote for the far-right Danish People's Party (DF), up from 12.3 percent in the previous 2011 election, with immigration cited as one of the top three campaign issues behind the economy and the country's cradle-to-grave welfare state.
DF “helps those that need it the most, I think. Hospitals and the elderly and nurseries. That's pretty good policy,” said Rita Petersen, a retired childminder attending a recent DF rally in the central town of Kolding.
DF was an influential player in Danish politics from 2001-2011, when it succeeded in imposing some of Europe's strictest immigration policies in exchange for helping successive right-wing governments pass legislation.
See also: The rise and rise of the Danish People's Party
Under Social Democratic Prime Minister Helle Thorning-Schmidt, in power since 2011, spending on asylum seekers has risen but the restrictions have remained largely in place.
Petersen is typical of the DPP's voter base: elderly, working class Danes — 43 percent are over the age of 60 — who want to reduce the amount of money spent on asylum seekers and unemployed, unintegrated immigrants, in order to spend more on health care, pensioners and childcare.
“We should have more focus on helping refugees in need, and we do that by helping in the areas surrounding (conflicts) where we can help a lot of people. And that's why we should tighten rules in Denmark,” DF leader Kristian Thulesen Dahl told AFP at the Kolding rally, as golden oldies blared from speakers next to a traditional Danish hot dog cart.
While Danish business is arguing the country needs immigrants to support its ageing population, DF wants higher pensions for low-income earners and more state-funded domestic help for pensioners.
See also: Denmark needs foreigners, business leaders tell pols
Few immigrants vote
DF’s success in the polls has been attributed to the fact that Thulesen Dahl is a less divisive figure than his outspoken predecessor Pia Kjærsgaard, toning down some of the party's most controversial rhetoric on immigration in favour of economic issues.
February's twin attacks in Copenhagen — when gunman Omar El-Hussein killed a Danish filmmaker outside a cultural centre before opening fire at a synagogue, killing a Jewish man — have had no direct impact on DF’s opinion ratings, but helped keep immigration on the agenda.
Among Denmark's immigrants, voter turnout and involvement in politics is lower than for ethnic Danes.
Of the 5.7 million people living in the Scandinavian country, nine percent were born abroad, with 296,000 of those coming from countries classified by Statistics Denmark as “non-Western”.
See also: Immigration in Denmark at an all-time high
Among the 530,000 Danish residents from an immigrant background over the age of 18, only a third are citizens, and within that group, voter turnout trails that of ethnic Danes by up to 25 percentage points, according to state-backed think-tank Kora.
Denmark is often credited with producing some of the world's happiest people according to an annual survey by the UN. But it has struggled to integrate immigrant communities who even after generations in the country are more likely to end up in crime and unemployment than ethnic Danes, official statistics show.
'Yalla vote'
Concerned by the bad rap immigrants are getting, a small group of immigrant activists have begun to get politically active.
“The integration process has sometimes failed,” said Bilal Elfout, a local politician who recently launched a Facebook page called “Yalla vote”, urging Danish immigrants to go to the polls on Thursday.
MPs including the Turkish-born Yildiz Akdogan and Özlem Cekic, of the Social Democrats and Socialists’ People’s Party respectively, have also visited immigrant-heavy neighbourhoods in get-out-the-vote efforts.
And three brothers of Pakistani origin last year founded the “immigrant-friendly” National Party, which wants to ease up immigration regulations, lift a ban on religious symbols such as the Islamic veil, and wants more staff in the healthcare sector.
It won't be able to field candidates in this year's election since some of the 20,000 signatures required to register a new party were filed too late, but the party says its mere existence is an important step.
“The fact that we have started a party is a sign that we want to be part of Danish society,” said Yahya Hassan, a 20-year-old born to Palestinian parents who shot to fame in 2013 with a debut poetry collection criticising his violent father and the alleged hypocrisy of some Muslims who commit crime.
See also: Ten exciting plots in the Danish election
After briefly becoming an unlikely darling of Denmark's far-right he decided to go into politics and joined the National Party, but will run as an independent this election.
The Scandinavian branch of Islamist group Hizb ut-Tahrir last week called on Danish Muslims to boycott the election, claiming democracy was “a sinking ship”.
To counter those views, Elfout urged fellow Muslims to attend a speech in Copenhagen's Grand Mosque by an imam on “the necessity and legitimacy of political work in Denmark”. Some 200 people showed up.
The following day the mosque hosted a political debate with representatives from most political parties, but not DF.