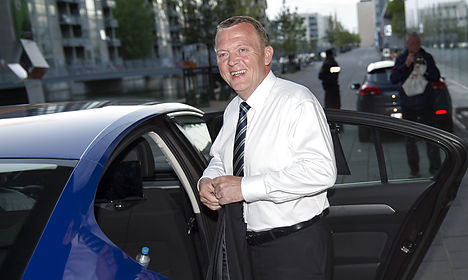 Opposition leader Lars Løkke Rasmussen said something has to be done about the benefits received by EU citizens. Photo: Keld Navntoft/Scanpix
Venstre, the Danish People’s Party (DF), the Conservatives and Liberal Alliance said on Thursday that they would work together to make it harder for EU citizens living in Denmark to obtain Danish welfare benefits.
In an agreement amongst the four parties entitled ‘Danish welfare in Europe’, they vowed to keep the EU from becoming a “social union”.
The two largest opposition parties, Venstre and DF, traditionally view Denmark’s relationship with the EU much differently. While Venstre has been a strong supporter of close relations with the EU and fully backs plans to end Denmark’s opt-out on justice affairs, DF has always had a much more eurosceptic tone.
See also: Denmark lays foundation for ending EU opt-out
The joint plan released on Thursday marks the first time that the blue bloc parties have come together on EU policies.
“We are far from in agreement on everything in relation to the EU. But we agree that if Denmark gets a new government after the parliamentary elections on June 18, we will stand behind Britain’s, and other like-minded countries’, work to ensure that the EU does not become a social union,” the agreement reads according to Jyllands-Posten.
The parties said that they will ensure there is “a fair relationship between contributing positively and receiving” welfare benefits. They plan to change the rules on EU citizens’ rights to the Danish unemployment benefits dagpenge and kontanthjælp as well as the quarterly benefits paid out to parents known as børnecheck.
“We can see that there are increasing withdrawals on Danish welfare services. We need to address the problem while it can still be handled. We [the four parties, ed.] agree that if there is a [parliamentary] majority among these parties, we will create a government that will do something both in the EU and here at home to ensure that Danish welfare remains in Denmark,” Venstre leader Lars Løkke Rasmussen told TV2 News.
Foreign Minister Martin Lidegaard of the Social Liberals (Radikale) criticized what he called a “sad” and “worrying” change of course from Venstre.
“I interpret this move as a genuflection to the Danish People’s Party. An attempt to remove the final stone in the road to clear the way for the Danish People’s Party to join a government coalition,” Lidegaard told Politiken.
Whether or not DF will join Venstre in a government coalition is one of the most intriguing plots in next week’s election.
DF's leader, Kristian Thulesen Dahl, has repeatedly said that the party is not interested in entering into a government agreement, arguing that there is more influence as a support party. This has led political opponents to accuse DF of not wanting to limit its ability to U-turn on controversial issues when public opinion changes.