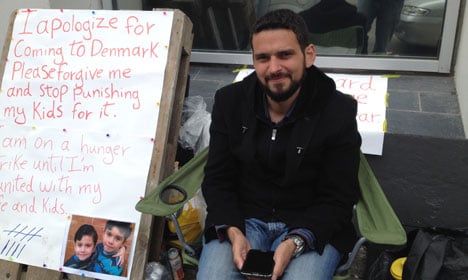 Omar Martini just hours after receiving word his family will join him in Denmark. Photo: Justin Cremer
Syrian refugee Omar Martini had been staging a hunger strike outside of the Danish Immigration Service (Udlændingestyrelsen – DIS) office for nine days when The Local met him on Thursday afternoon. The 35-year-old was protesting the fact that seven months after he had applied for family reunification to bring his wife and two boys, aged five and eight, to Denmark, he had not heard a response.
But on Thursday morning, Martini received the answer he had been waiting for.
“I received my permit for my wife and kids to come here. They came out this morning and handed me my papers. I think what I did here paid off,” he told The Local.
“I called my wife about an hour ago and she is still is still crying,” he said.
Martini said he came to Denmark via a dangerous journey through Libya and by sea to Europe before being brought to Denmark by a smuggler. He chose Denmark because he had heard that the people were open and tolerant and that family reunification cases are processed quickly.
He soon discovered however that the information he had read was “outdated” and that although most of the Danes he has met have been very kind and generous, he has followed the political debate closely since arriving and has concluded that Denmark simply does not want his kind here. One of Omar Martini's signs. Photo: Justin Cremer
“If I knew that we weren’t welcome, I wouldn’t have come. I would have either found another place that was more welcoming or just stayed at home and waited for a barrel bomb to drop on me,” he said.
Despite the long struggle to get reunited with his family, Martini said that when they join him in about a month’s time, he is ready to move forward.
See also: Asylum and integration take election spotlight
“I just have to start my life. Get a job and learn the language. I do have hopes and I think that I will do well in this country,” he said.
But while Martini will head back to his apartment on the island of Funen knowing that his wife and boys will be with him in a matter of weeks, many other Syrian refugees continue to wait to see their family members again. 35-year-old Hazar started a hunger strike on Wednesday. Photo: Justin Cremer
“They just tell me I have to wait”
One of them is 35-year-old Hazar Kodmani, who began a hunger strike outside of the Danish Immigration Service on Wednesday. She has been waiting to bring her husband and two children, 13 and 15, from Syria to Denmark for seven months.
“They just tell me I have to wait. Now I plan to stay here until I get an answer,” she told The Local through an interpreter.
Kodmani said she has had health problems that led to her being hospitalized last week, making her hunger strike particularly dangerous. Tariq: “If my wife doesn't come here then what am I doing? I have nothing.” Photo: Justin Cremer
“My wife is all alone”
Interpreting for her was 29-year-old Tariq Dawara, who came to DIS on Thursday to begin his own hunger strike.
“I have been waiting eleven months to bring my wife. She is on the border between Syrian and Turkey. It is a dangerous area there and she is all alone,” he told The Local.
Dawara came to Denmark 13 months ago. Like Martini, he had heard that family reunification cases are processed quickly in Denmark. He was supposed to have received an answer on his wife’s case a month ago but has heard nothing.
“Now I’m going to sleep here until I have a positive answer or if after 15-20 days I have no answer, I will probably leave Denmark and go back to Syria. I came here to live in safety with my wife and if my wife doesn’t come here, then what am I doing? I have nothing here,” he said.
Dawara said he was brought to Denmark from Libya via a human smuggler and almost died while at sea. He left his wife behind because he knew the journey would be dangerous. His plan was to bring her to the country through safer channels.
“It’s very disappointing to wait all this time and every time I call they just say I have to wait more. I can't study or work when all I do is think about my wife and worry if she is safe,” Dawara said.
Dawara said he has been helped by Danes since he arrived, quickly found an internship and can now speak some basic Danish. “The only problem has been here,” he told The Local, pointing to the DIS building.
“I am very happy for Omar and I hope the same will happen for us,” he said.
The kindness of neighbours
The Local contacted DIS to ask about the timing of Martini’s family reunification approval, coming as it did just as his story began making the rounds in the national press. A spokesman told us that he could not comment on individual cases but that the majority of family reunification claims are processed within the stated five month period.
Because Denmark has seen a massive increase in asylum seekers – a total of 14,815 people sought asylum in 2014 and more than half of those were Syrians – DIS has hired extra staff to deal with the load.
While caseworkers continue to whittle down the mountain of cases, Hazar and Dawara plan to stage their hunger strike until their names come up.
Thanks to the decision in Martini’s case, they will have at least a small measure of comfort as they sleep on the hard ground on Ryesgade.
“I came here with just a backpack but thanks to the people in the neighbourhood, I now have a chair, an umbrella and a sleeping bag. Yesterday, someone from the neighbourhood even brought me a doctor,” Martini told us in between receiving congratulations from well-wishers.