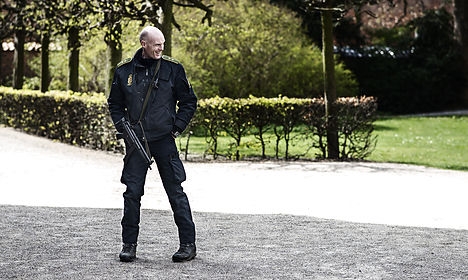 Officers say that quotas and an increased focus on terror in Copenhagen have affected their ability to work. Photo: Simon Læssøe/Scanpix
Five officers from Funens Police have said that criminals and drug dealers have free rein to do as they please on the island because cops don’t have the resources to deal with them.
The officers told the Danish Police Union’s (Politiforbundet) members' magazine, Dansk Politi, that “it is relatively risk-free to deal cannabis and other drugs” on Funen.
“We basically never investigate on the island!” one of the officers, an investigator of organized crime, told Dansk Politi.
Officers in eastern Jutland told the trade magazine that the same is true in their neck of the woods.
See also: Danish cops overworked and undermanned
The officers said that preset targets that police must hit on gang criminality leave them with not enough time or resources to focus on other groups of criminals or on drug abusers.
As a consequence, they say that drug prices have plummeted since it is now so much easier for the dealers to operate in peace.
“My colleagues and I have experienced that it is much easier for young people to fall into a drug environment. Maybe it is unavoidable because [drugs] are present everywhere the youths hang out and meet but remain invisible in regards to [the police] target goals,” one of the anonymous officers told Dansk Politi.
Another officer told the trade magazine that he often completes all of the necessary paperwork on a break-in case in one day but then will wait two weeks to send the final documents to the victim.
“Then it looks like we investigated. We just haven’t,” he said.
The head of Funens police union, Steffen Daugaard, said he disagreed with the officers.
“I cannot recognize the picture that it is risk-free to deal drugs outside of Odense. I won’t speak ill of anyone who feels that way but it’s not something that I have heard from my members,” he told Jyllands-Posten.
The Funen Police officers’ claims come in the wake of a report from Berlingske newspaper in April that showed that Danish police officers have been focusing so much on anti-terror measures that other police work is being overlooked and officers face burnout.
A long line of police representatives warned that by moving so many officers from other parts of Denmark to Copenhagen in the wake of the twin shootings in February, basic police work in other parts of the country would suffer.
There are currently 10,566 police officers nationwide, and the chairman of the Danish Police Union said they are “pressured like never before”.
“There is a new reality in which there are new assignments that Danish police must carry out. And that has to be taken from the resources we had before. Of course this will have consequences for individual residents,” Claus Oxfeldt told Berlingske in April.
Daugaard conceded to Jyllands-Posten that Funen Police officers have been under pressure due to the anti-terror efforts in Copenhagen and that “many officers are frustrated that it is difficult to schedule their work when they suddenly have to rip a week out of their calendar to go to Copenhagen.”