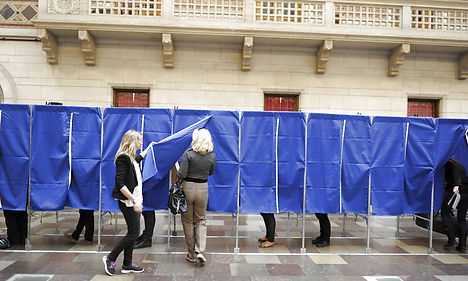 Photo: Liselotte Sabroe/Scanpix
Some 450,000 adults will not be able to cast a vote in Denmark's June 18th election, according to an estimate from the Economy Ministry. That includes the well over 300,000 foreigners living in Denmark as well as the roughly 135,000 Danes living abroad.
See also: Denmark needs foreigners, DI tells politicians

The Danish constitution (grundloven) only allows Danish citizens who are residing in the country to vote, a rule that Roger Buch, a senior researcher at Denmark’s Media and Journalism College, argues is in dire need of modernization.

“We have to face the reality that it is now seven percent of the [adult] population who cannot participate in the elections. Twenty years ago it was two percent. In just a few years, it will be 10, 15, or even 20 percent. I do not think this is sustainable in the long run,” Buch told broadcaster DR.

The increase in the proportion of disenfranchised voters is caused by more Danes moving abroad as well as higher number of migrants and refugees coming to Denmark.

Denmark's election rules have been often come under criticism from the EU Commission because Danes who exercise their right to free movement within the EU lost the ability to vote.

In contrast to Denmark, all other Nordic countries allow their citizens living abroad to vote. Sweden, Norway and Finland allow their citizens to vote no matter how long they live abroad while Iceland limits the right to those who have lived abroad for less than ten years.

Denmark does allow for some exceptions, including those who intend to return to the country within two years, live abroad for documented health reasons or work in an international position for the Danish government.

Politicians have traditionally been averse to making amendments to the constitution, but some have begun to call for a change, including Social Liberal (Radikale) MP Zenia Stampe.

“I think there is plenty cause to reassess the applicability of the constitution to modern society. It does not secure our political freedoms in several ways, and when such large groups of people either cannot vote or are disenfranchised, it is not sufficiently securing our democratic rights,” she told Ugebrevet A4 in a recent interview.

The Danish People's Party has also advocated for Danes living abroad to be given the right to vote.

“When you have a Danish passport, Danish citizenship and the right to move back to the country, I think it is fair that you are allowed to voter,” DF spokesman Søren Espersen told DR, adding that his party would advocate for adopting an Icelandic model that would cap the right to vote after a certain amount of years.