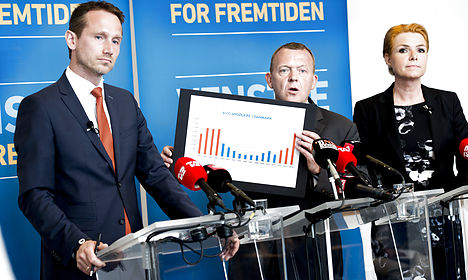 Venstre's Kristian Jensen, Lars Løkke Rasmussen and Inger Støjberg announced their asylum reform plans on Tuesday. Photo: Keld Navntoft/Scanpix
Leading opposition party Venstre on Tuesday announced plans to put an “immediate halt” to the “massive influx” of asylum seekers coming to Denmark if his blue bloc is victorious in the June 18th election.
Party leader and former PM Lars Løkke Rasmussen presented Venstre’s proposed asylum reform and vowed to call parliament into an emergency summer session to address Denmark’s refugee policies.
“We cannot sit and wait until October because we know that it is in the summer months that the pressure is the greatest,” Rasmussen said at a press conference.
“In recent years we have been challenged by a nearly explosive influx of asylum seekers. It is the largest in 15 years and nothing points toward it tapering off,” the Venstre leader said.
Denmark saw its asylum seeker numbers double in 2014 compared to the year before, leading the government to tighten its immigration laws by introducing a temporary, one-year residence permit for asylum seekers fleeing civil wars such as the Syrian conflict. Refugees have also been limited in their ability to bring family members to Denmark.
Rasmussen announced an eight-point plan that includes decreasing the amount of financial support that refugees receive from the state, refusing to give permanent residence to refugees unless they are employed and can speak Danish and a reevaluation of Denmark’s international obligations when it comes to refugees.
Rasmussen said that his party’s plan would make Denmark a less attractive destination for asylum seekers, thus cutting the number of people who seek refuge in the country.
“There is no doubt that this tightening of conditions will give rise to fewer asylum seekers,” he said.
“Not a good day”
Andreas Kamm, the general secretary for the Danish Refugee Council, bemoaned the signals that Venstre's proposal sends to refugees already in Denmark.
“The election rhetoric is not helpful for integration or for people's sense of self-worth in Denmark. It is hard to feel welcome here when one listens to what is said in the election campaign,” Kamm told Politiken.
“I am saddened that the focus has gone from providing persecuted people protection in Europe and Denmark to trying to avoid that that protection happens here. It is a frustrating development in every way,” he added.
United front among opposition
On Wednesday, Venstre was joined by fellow opposition parties the Conservatives, Danish People’s Party and Liberal Alliance in a joint advertising campaign saying that Denmark’s “foreigner policy needs to get back on track”. The parties pledged lower social benefits for foreigners, tougher deportation rules, increased Danish language requirements, denial of citizenship to “suspected terrorists” and redirecting Denmark’s asylum policies to focus on helping refugees in their local communities rather than accepting them in Denmark.

Rasmussen has focused a great deal of his efforts on the contention that the number of asylum seekers coming to Denmark has grown under Prime Minister Helle Thorning-Schmidt, saying that Denmark went from tenth to fifth among EU countries in accepting refugees.
Critics have pounced on those claims, pointing out that under his tenure as PM, Denmark was also as high as number five compared to other European countries and that the increase in asylum seekers in Denmark mirrors the trend seen across Europe.
“Venstre should stop trying to make Danes believe that there would have come fewer refugees to Denmark if they had been in power,” PM Helle Thorning-Schmidt has said.
Although Thorning-Schmidt rejected Venstre’s Tuesday proposal, she pledged to sit down with the party after the election “and create a framework for how we can accept these refugees,” she told Politiken.
A competition over the toughest rules
The PM has repeatedly touted the fact that her government has implemented tighter asylum rules, saying that it is the first time in 12 years that Denmark has made it more difficult to get refugee status in Denmark.
With both prime minister candidates expressing a desire to limit the number of refugees in Denmark, MP Johanne Schmidt-Nielsen of the left-wing Red-Green Alliance (Enhedslisten) accused them of competing to see “who can make life hardest for people on the run”.
“Venstre and the Social Democrats have simply initiated a competition. They compete to see who can make the toughest rules. Thorning brags about removing the right of children to join the parents in safety here in Denmark,” Schmidt-Nielsen wrote on Facebook, referring to the government’s decision to restrict family reunification for refugees.
“Regardless of whether it is Thorning or Løkke who becomes prime minister, refugees will come. And they both know that. We should use our energies to discuss how to create much better integration,” she added.