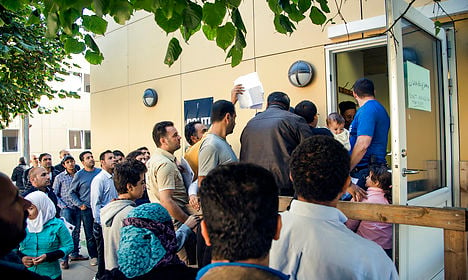 New statistics released by the Danish Immigration Service (Udlændingeservice) show that 90 percent of all asylum applications have been approved so far in 2015. This is in stark contrast to 2004, where under the Venstre-Conservative coalition government, only ten percent of the applications were approved.

“This illustrates that there is a need to implement more restrictions in this area, and that the government’s efforts to do so have been inadequate,” Venstre spokesman Karsten Lauritzen told political site Altinget.

MP Ole Hækkerup from the Social Democrats disagreed, saying that it has particularly been refugees from war-torn Syria who have been granted asylum.

“That said, we naturally have to keep an eye on where these people are coming from and why,” he told Altinget.

Denmark saw a doubling in asylum seekers in 2014 compared to the year before. In response, the Social Democrat-led government tightened its immigration laws by introducing a temporary, one-year residence permit for asylum seekers fleeing civil wars such as the Syrian conflict.

The new permit can be extended for another two years and does not allow family reunifications to be granted during the first year.
As a result, the number of people applying for Denmark had fallen dramatically and continued to decrease in February and March. The newly-released numbers from the Danish Immigraiton Service show however that in April, nearly 100 more people applied for asylum than in the month before.
The general secretary for the Danish Refugee Council, Andreas Kamm, argued that politicians should not be competing to bring the share of successful applications down.

“Everyone is aware of the terrible situation in Syria and knows that there is a need to provide a safe haven for these people. The high percentage of approved asylum grants is due to variations in the flow of refugees and the types of conflict that are ongoing in the world today,” Kamm said.

The UN's refugee agency UNHCR estimates that there are over 51 million displaced persons in the world today, which is the highest since the Second World War.