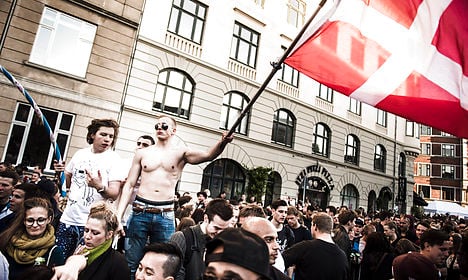 Distortion in Vesterbro. Photo: Simon Læssøe/Scanpix
Copenhagen’s wild four-day party known as Distortion moved to Vesterbro on Thursday after a successful opening day in Nørrebro.
The two hipster haven districts get the first two days of Distortion before it moves on to Refshaleøen, or ‘Distortion Island’, for its final two days.
See also: Vesterbro tops Nørrebro in the hipster war
Before the island party however, Distortion will join up with the powers that be in Christiansborg for a ‘people’s party’ celebrating Denmark’s Constitution Day and the 100th anniversary of women’s suffrage. The bash at Christiansborg is scheduled to include a ‘pool party’ in the canal and a speech from the nation’s first female prime minister, Helle Thorning-Schmidt.
See also: Denmark marks 100 years of women's rights
Distortion has been converting the Danish capital into one giant party every year since 1998. In addition to its street parties, which organizers like to call “orchestrated chaos” there are also a long line of events in area clubs, museums and theatres. Photos from Distortion’s first night in Nørrebro can be seen here, photo highlights from day two in Vesterbro here and much more about the festival here.
Click through on the photo below for the gallery of Thursday night's action. After Vesterbro, the next stops are Christiansborg and 'Distortion Island'. Photo: Simon Læssøe/Scanpix

PARTNER CONTENT
Why we love Britain: Our ‘Best of Blighty’
DENMARK
Museums, art galleries and zoos reopen in Denmark
Visitors come to the ARoS art gallery in Aarhus, which opened on Friday after two months' closure. Photo: Bo Amstrup/Ritzau Scanpix
The original plan for Denmark was to keep museums, zoos, theatres, cinemas and similar attractions closed until June 8.
But after a deal was struck in the country's parliament late Wednesday they were instead allowed to open immediately.
“It was pure cheer. Finally, we can get started,” Peter Kjargaard, director of the Natural History Museum of Denmark, told broadcaster DR.
Kjargaard added that he was excited to show off the museum's new dinosaur exhibit, even if it wouldn't be ready for another month.
But not all museums reopened their doors on Thursday. Some said they would start receiving customers over the weekend or next week.
Under the deal agreed in parliament, the Danish border remains temporarily closed, but starting next week the list of exceptions allowing travel to Denmark will be expanded to include permanent residents of all the Nordic
countries and Germany wanting to visit relatives, loved ones, or homes they own in Denmark.
High school students will also begin returning to classrooms shortly.
Also on Wednesday, the Danish health agency SSI, which operates under the health ministry and is responsible for the surveillance of infectious diseases, released a report indicating the spread of the disease seems to be slowing, even as the country had started opening up.
SSI said that as of May 18 the infection rate, or reproduction rate, was estimated at 0.6, compared to 0.7 on May 7.
A reproduction rate of 1.0 means that one person with COVID-19 infects on average just one other, while a rate of below 1.0 indicates that the spread is declining.
On April 15, the country started reopening pre-schools and resuming classes for the youngest primary school children — under strict social distancing and hygiene guidelines.
Danish middle schools followed suit this week.
Another report this week by SSI, however showed that only one percent of Danes carried antibodies for the virus, raising concerns that the country could be vulnerable to a new wave of the virus.
SHOW COMMENTS