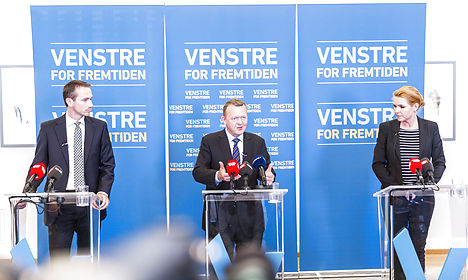 L-R: Venstre's Kristian Jensen, Lars Løkke Rasmussen and Inger Støjberg. Photo: Uffe Weng/Scanpix
Several high-placed business leaders told Finans on Wednesday that the sharp tone of the immigration debate in the ongoing election campaign risks scaring needed foreign workers away from Denmark.
“I miss a debate over the middle in Danish politics, where problems can be discussed in a rational and sober manner. Europe cannot just shut its doors. We need foreign workers because we have a population that is getting smaller and older,” Peder Holk Nielsen, the head of Novozymes, told Finans.
See also: Danes talk tough on immigration pre-election
Martin Gaarn Thomsen, the head of cleaning giant ISS, also appealed for a debate that is “decent, impartial and respectable to foreigners who come here to work” while Colopost head Lars Rasmussen lamented the “hard tone in our foreigner debate” which he said makes it too “easy to stigmatize a whole group of people, and there is no reason for that”.
Venstre has been campaigning on a claim that casts doubts on employment figures cited by Thorning-Schmidt as a sign of her government’s success.
Venstre points to an analysis from the Confederation of Danish Employers (DA) that found that while 41,416 new positions have been created since Thorning-Schmidt took office in the autumn of 2014, a vast majority of those have been filled by foreign workers. DA said that some 30,000 of the new jobs in the private sector were filled by foreigners and that just 654 new full-time positions have been obtained by Danes.
See also: 'Denmark is out of the crisis': Thorning-Schmidt
Tine Horwitz, the CEO of the Consortium for Global Talent (CGT), told Finans that she has contacted the head of DA to express her disappointment in the political nature of its analysis.
“DA needs to come with an explanation for the study. I don’t think that it was meant in the way that some politicians have used it. But it has set off a debate that likely wasn’t his [DA head Jørn Neergaard Larsen, ed.] intention,” she told Finans.
CGT is an umbrella organization representing Denmark’s 20 largest companies and promoting the need for talented foreign workers.
This is hardly the first time that Denmark’s business community has appealed to politicians to dampen their anti-immigration message.
See also: Industry leaders' plea: Treat foreigners better
In September, the nation’s most influential interest group – the Confederation of Danish Industry (DI) – asked Danish leaders to make life easier for foreign workers.
“Fears of welfare tourism and social dumping unfortunately overshadow all too often the fact that foreign workers are first and foremost a gain for Denmark. Those foreigners who come here to work don’t bring Denmark down. They lift Denmark up,” DI’s CEO Karsten Dybvad said at DI’s annual meeting.
He added that “highly qualified foreigners are worth their weight in gold” and said that foreign labour represented a 85 billion kroner net gain for Denmark in 2013.