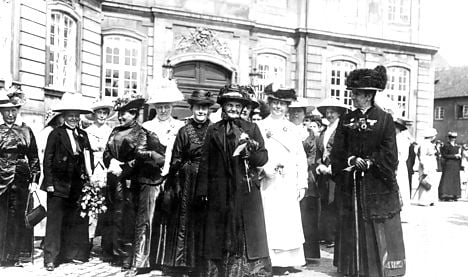 On June 5, 1915 thousands of women marched through Copenhagen to celebrate their right to vote and run for office. Photo: Unknown/Scanpix
Friday marks the 100th anniversary of Denmark’s 1915 constitution that gave women the right to vote.
UPDATE: See highlights from Friday's celebration
The 1915 constitution is actually the second of five writings of the constitution, each of which has fully replaced its predecessor, but is viewed as just as, if not more, important than the 1849 original.
The constitution passed by parliament and signed by King Christian X on June 5, 1915 gave women the right to vote and run for office. It also extended those same rights to men and women at all levels of society, marking the first time that the lower and working classes were given the same rights as the well-to-do.
In the 1849 and 1866 constitutions, political engagement was reserved for men over the age of 30 who headed their own households. That put power in the hands of just 15 percent of Denmark’s population.
The 1915 constitution opened the doors for the inclusion of all Danish citizens and has thus come to be known “the democracy constitution”. The principles of equality established 100 years ago on Friday became the foundation that modern Danish society was built upon.
Upon the signing of the 1915 constitution, upwards of 20,000 Danish women marched through Copenhagen to Amalienborg Palace to mark the momentous occasion. See video below and photos here.
Fast forward a century later, and Denmark sits as one of the most gender-equal nations in the entire world. In the World Economic Forum’s Global Gender Gap 2014 report, Denmark was ranked as the fifth most equal country, coming behind just its Nordic neighbours Iceland, Finland, Norway and Sweden.
Gender equality still continues to lack in the workforce, however. Denmark has the biggest gender wage gap of the three Scandinavian countries, with Danish women earning 16.4 percent less per hour than their male counterparts.
The progress made in the last century will be on obvious display on Friday as PM Helle Thorning-Schmidt will take a temporary break from her quest to extend her tenure as the nation’s first female prime minister to address both parliament – which is currently made up of 38 percent women – and a public celebration at Christiansborg Slotsplads.
Thorning-Schmidt’s speech will be just part of a massive Constitution Day ‘people’s party’ held at Christiansborg in connection with the Copenhagen street festival Distortion. Also on the agenda is a communal ‘pool party’ in the canals, a classic birthday party and much more. The programme can be seen here.
For photos of the 1915 march through Copenhagen, click through on the photo below.