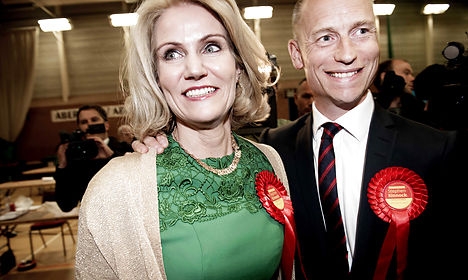 Helle Thorning-Schmidt and Stephen Kinnock at his victory party last month. Photo: Linda Kastrup/Scanpix
The next time Helle Thorning-Schmidt sees US President Barack Obama, their selfie may be a bit awkward.
Thorning-Schmidt’s husband, the recently-elected Labour MP Stephen Kinnock, had some choice words for Western leaders when speaking to the Huffington Post UK.
See also: PM's husband wins parliamentary seat
“We have never seen a time where we have such a risk adverse and timid global leadership – President Obama with his dogma of strategic patience, which to me just seems like an excuse to do nothing,” Kinnock said.
“We have European Union member states squabbling amongst themselves constantly looking to make headlines in their own national capitals rather than actually recognising the only way to create a resilient global and regional system is by compromising, cooperating, collaborating,” the Aberavon MP continued.
But Kinnock wasn’t done. He also said that today’s “global institutions are totally inadequate”.
“The United Nations, I’m very disappointed and sad to say this, I think it’s become something of a laughing stock. I think that there’s big questions about the legitimacy of the IMF, the World Bank, which are still dominated by the industrialised Western powers in the world where money and powers are shifted so much from west to east and from north to south,” Kinnock told the Huffington Post.
Kinnock, who lived and worked in Russia and even acted in a 2007 Russian B-movie, also slammed the West’s “profound misunderstandings of the Russian people”. See a Russian-speaking Kinnock in a clip from 'Haute Couture Dress' below.
Kinnock’s role in the Russian film ‘Haute Couture Dress’ was relatively unknown until it surfaced in the Danish press in 2012. The PM’s husband played wealthy American Tim, who falls in love with the young Masha after she attempts suicide.
Kinnock has joked that he was grateful that his wife “does not judge me for my acting skills”.
She may however be less pleased with his Obama comments, which mark the second time he has insulted one of Thorning-Schmidt’s famous selfie buddies.
See also: PM's husband: Cameron was unwelcome selfie guest Kinnock has now blasted both of his wife's selfie buddies. Photo: Roberto Schmidt/AFP/Scanpix
In a November interview with Huffington Post, he blasted British PM David Cameron for “muscling in” on the shot, which was taken at the December 2013 memorial service for Nelson Mandela and propelled Thorning-Schmidt onto the world stage.
“For me, the most striking thing about the selfie was our prime minister muscling in on the left. She [Thorning-Schmidt, ed.] was sitting and chatting with Obama, then the selfie idea somehow emerged, and then suddenly Cameron appeared in the shot and managed to muscle himself in on the picture,” Kinnock said.
Kinnock and Thorning-Schmidt have been married since 1996. The couple has two teenaged daughters, Johanna and Camilla.
The couple also had an extensive turn in the media spotlight over allegations that Kinnock evaded paying Danish taxes. He was cleared of any wrongdoing but the incident, which included the illegal leaking of the couple’s private tax forms, led to massive political fallout for Tax Ministry and Skat officials as well as several Venstre politicians.