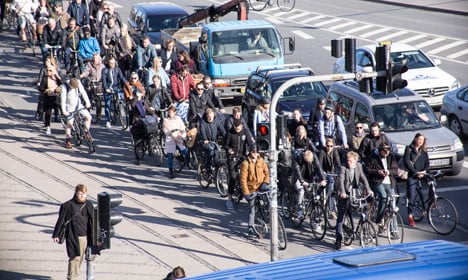 Copenhagen: world's best cycling city. Photo: Copenhagnize
Seen through the eyes of a Copenhagener, order has been restored to the bicycling world.
After coming behind Amsterdam the past two times, the Danish capital has claimed the title of the best cycling city in the world according to influential urban consulting firm Copenhagenize.
Released on Tuesday, the Copenhagenize Index praised the Danish capital for being “impressively consistent in its investment in cycling as transport and in making efforts to push it to the next level”.
“With regards to a uniform network of urban design for bicycles, Copenhagen is unrivalled in the world,” Copenhagenize wrote.
The index pointed to the city’s remarkable increase in the percentage of cyclists in just two short years. Copenhagen’s residents went from using a bicycle for 36 percent of their travels in 2012 to 45 percent in 2014. The consulting firm, which advises cities worldwide on bicycle-friendly urban design, said that such a steep increase “has never happened anywhere. Seriously.”
Copenhagen rode to its top ranking not only on the strength of its residents willingness to cycle but on the city’s commitment to helping them get around easier.
Three new city bridges, including the much-hyped Cykelslangen, have opened since the last index and four more are coming. The city and its surrounding municipalities have also invested in a series of ‘bicycle superhighways’ meant to make long biking commutes easier and more appealing.
“You simply can't keep track of the constant flow of new bicycle urbanism stuff in Copenhagen. High points in modal share increase and a good harvest of bonus points for that, as well as infrastructure and political will pushed Copenhagen into first place. Innovation. Investment. Improvement,” the index stated.
Although Copenhagen knocked its Dutch rival out of the top spot, the two cities still remain head and shoulders above the rest.
“Copenhagen overtook Amsterdam for first place, but it’s still those two cities that dominate,” Copenhagenize CEO Mikael Colville-Andersen wrote.
While the index was full of praise for Copenhagen, it didn’t get off without a bit of criticism.
Copenhagenize has been a consistent critic of the city’s expensive, delayed and under-used bike share programme and called for officials to pull the plug.
“Kill off the failed bike share programme, it's getting embarrassing. Put the money into something that actually works,” Copenhagenize wrote.
Although the city has received less than a fourth of the bicycles promised by provider GoBike, a majority of By- og Pendlercykelfonden – a joint operation between the City of Copenhagen, Frederiksberg Municipality and rail provider DSB – approved extending GoBike’s delivery deadline until mid-October.
That decision was against the wishes of Copenhagen Deputy Mayor Morten Kabell, who last month said the city “mustn’t throw money after what has proven to be a questionable provider”.
Kabell was singled out in the Copenhagenize Index for his “clear leadership” and “clear visions”.
This was the third edition of the Copenhagenize Edition. The bi-annual study looked at 122 metropolitan cities around the world and ranked them according to 13 categories including bicycle advocacy, infrastructure, modal share and the local biking culture.
Europe dominated the rankings although Buenos Aires, Argentina and the US city of Minneapolis, Minnesota made their debuts in the index.
The top 10 cities in the 2015 Copenhagenize Index were:
1. Copenhagen
2. Amsterdam
3. Utrecht, Netherlands
4. Strasbourg, France
5. Eindhoven, Netherlands
6. Malmö, Sweden
7. Nantes, France
8. Bordeaux, France
9. Antwerp, Belgium
10. Seville, Spain.
For more on the index, click the image below.