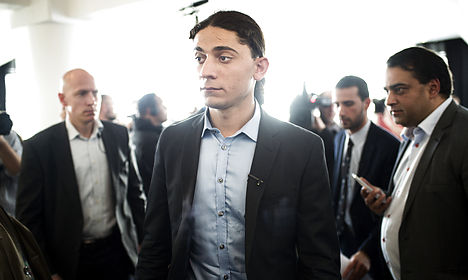 A wild weekend for Yahya Hassan. Photo: David Leth Williams/Scanpix
It’s not every day that a parliamentary candidate gets arrested after a late-night visit to a bar, but then again Yahya Hassan isn’t your typical candidate.
The 20-year-old Hassan, who is attempting to make a transition to politics after becoming Denmark's best-selling poet of all time, was arrested by East Jutland Police after a visit to the Aarhus bar Under Masken. The poet told TV2 that he ordered a beer just before closing time and then got in to an argument with personnel when it was taken away.
See also: Ten exciting plots in the Danish election
Police officers then came to the bar and asked Hassan for his personal information. Hassan said he willingly gave police his name and CPR number and freely left the bar.
But he would encounter the police again just a short time later after the poet claimed to have been attacked by a group of young men in an Aarhus square.
“I was surrounded by a group of youths and attacked, but passers-by came to rescue me. In connection with that, I lost my hat,” he told TV.
Hassan said that while searching for his hat, four police officers came and arrested him. Hassan attempted to film the episode on his mobile phone, but said that police confiscated it.
“They twisted my arms to the point of pain and treated me as a whole very roughly while I was in their custody. I felt like I went from one attack to another,” he said.
Hassan has filed a complaint with the Independent Police Complaints Authority (Den Uafhængige Politiklagemyndighed) over the arrest.
“We believe that this was an illegal police action. My client gave the police the required information, there was an unwarranted confiscation of a mobile phone that was used to film the episode and the arrest was too heavy-handed; my client said that he was put in handcuffs,” Hassan’s lawyer, Claus Bonnez, told TV2.
The two meetings with police in the early hours of Sunday were not the last time Hassan would see them before the weekend ended.
Late on Sunday night, Hassan said that a vehicle tried to run him over at Aarhus’s Town Hall Square.
“After that, they parked the car and two men got out and started chasing me on foot. They threatened to kill me and beat me,” he told Jyllands-Posten.
Hassan said he ran in to a 7-Eleven and asked an employee there to call police. East Jutland Police officers arrived on the scene at around 1am, but Hassan said he didn’t know if the two men were arrested and East Jutland Police declined to comment on the episode.
Hassan recently voluntarily gave up protection from the Danish Security and Intelligence Service (PET), which had been guarding him since he rocketed to fame after the 2013 release of his book of poems, many of which were critical of Islam and elements of Denmark’s immigrant community.
This weekend’s incidents were far from the first violent confrontations that Hassan has been involved in since becoming a celebrity.
In November 2013, he was assaulted in Copenhagen Central Station by a then 24-year-old man who attacked the poet for being an “infidel”.
In March 2015, Hassan was found guilty of assault for an incident in Aarhus in which he allegedly punch a local man outside of a restaurant. The poet filed an immediate appeal against the decision.
The following month, he was assaulted in a Copenhagen night club.
Hassan is running for parliament as an independent now that the National Party has given up on its quest to obtain enough verified voter signatures in time to qualify for the June 18 election.