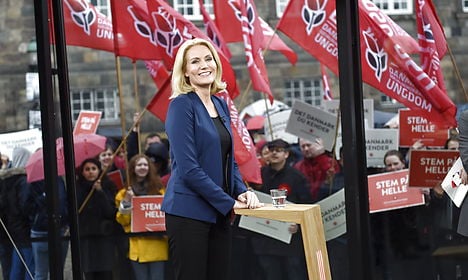 PM Helle Thorning-Schmidt ahead of a Sunday night debate against Lars Løkke Rasmussen. Photo: Keld Navntoft/Scanpix
If elections were held today, the centre-left bloc backing Prime Minister Helle Thorning-Schmidt's coalition would win 50.5 percent of the vote compared with 49.1 percent for the right-wing opposition, according to pollster Voxmeter.
The survey marks a turnaround for the ruling bloc, which only last week was trailing the opposition with 45.6 percent of voter sympathies compared with 54.3 percent for the right-wing parties.
See also: Ten exciting plots in the Danish election
A second poll released on Monday however still showed the opposition ahead. Polling company Megafon gave Thorning-Schmidt's group 48.6 percent compared with 51.4 percent for the opposition. Megafon last put the ruling bloc in the lead in June 2014.
Opposition leader Lars Løkke Rasmussen is unpopular with voters after an expense scandal and came under fire last week for making allegedly exaggerated claims about how little a Danish worker on unemployment benefits stands to gain from taking a job.
The opposition needs the support of the anti-immigration Danish People's Party (DF) to pass legislation in parliament but it's unclear if the party would seek to join a future government, which could limit its anti-establishment appeal.
See also: What you need to know about Denmark's election
Thorning-Schmidt on Wednesday called a general election for June 18, almost three months before a September 14 deadline and one day after the government announced a 39 billion kroner (5.2 billion euro, $5.7 billion) welfare spending package and raised its growth forecast for 2015.
Denmark was harder hit by the financial crisis than its Scandinavian neighbours, dipping in and out of recession, but an economic recovery is now taking hold and the country last week registered its  seventh straight quarter of growth.