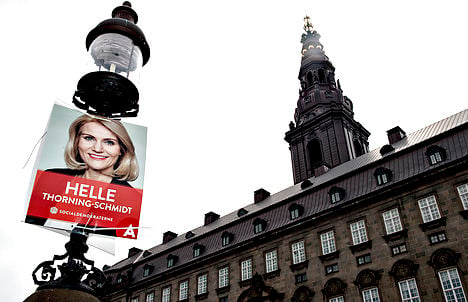 The PM's quest for a second term is just one of several dramas playing out. Photo: Bax Lindhardt/Scanpix
1. Helle vs Lars Photo: Mads Nissen/Scanpix
There are a lot of interesting subplots to the Danish elections, but the main attraction is the battle for the office of prime minister. Helle Thorning-Schmidt made national history by becoming the first female PM and she’s busy making the case to the Danes to give her four more years in office.
But also wanting to return to the position is Lars Løkke Rasmussen, who served as PM from 2009-2011. Unlike Thorning-Schmidt however, Rasmussen did not get there by election but was rather selected to replace party cohort Anders Fogh Rasmussen when he was appointed secretary general of Nato.
See also: What you need to know about Denmark's election
Thorning-Schmidt spent much of her four-year tenure watching her centre-of-left parties bleed voter support but that has been turning around as of late and she has consistently topped Rasmussen when Danes are asked who they’d rather see as the nation’s leader. She’s been helped along by Rasmussen’s numerous spending scandals, which at one point had political analysts predicting that he would step down as Venstre leader.
The real question will be whether Danes agree with Thorning-Schmidt’s contention that “Denmark is in better shape today than it was in 2011.”
2. The fate of the Danish People’s Party Kristian Thulesen Dahl. Photo: Thomas Lekfeldt/Scanpix
The anti-immigration Danish People’s Party (DF) has seen its popularity grow to record levels since the 2011 election, so speculation abounds over whether that voter support will hold through the election.
Even more interesting though is what the party will do if the election results in a majority for the right-of-centre coalition. DF's leader, Kristian Thulesen Dahl, has repeatedly said that the party is not interested in entering into a government agreement, arguing that there is more influence as a support party. This has led political opponents to accuse DF of shirking power and avoiding responsibility for its various proposals, which are often rolled out with no plan for how to finance them.
See also: Danes talk tough on immigration pre-election
If DF chooses not to enter a government coalition with Venstre, the opposition bloc may not be able to secure a majority as Venstre’s former coalition partners the Conservatives have plummeted in voter support and are expected to have a poor election.
3. The rise of Liberal Alliance Anders Samuelsen, Liberal Alliance. Photo: Claus Fisker/Scanpix
Some polls have shown libertarian party Liberal Alliance (LA) almost doubling its 2011 results, when it received five percent of the vote. With its message of lower taxes, more personal freedoms and less government bureaucracy, the party has struck a tone with young voters.
Political analysts predict a strong election result from LA and the Anders Samuelsen-led party could even end up in a government coalition with Venstre. It’s a pretty impressive position to be in for a party that polled at precisely 0.0 percent just six years ago.
4. The kingmaker role of The Alternative Uffe Elbæk, The Alternative. Photo: Thomas Lekfeldt/Scanpix
The new political party The Alternative could play an outsized roll in the election results. The party, fronted by former Social Liberals (Radikale) culture minister Uffe Elbæk, qualified for inclusion on the ballot in February and although it is only polling at around 2.5 percent, it could make or break things for Thorning-Schmidt.
If it crosses the election threshold of two percent of the popular vote, The Alternative plans to support Thorning-Schmidt’s coalition. The party’s mandates could be exactly what it takes to push the red bloc to victory. If however The Alternative receives less than the needed two percent, all of its votes, which would have most likely otherwise gone to one of the other red bloc parties, will have been wasted and Lars Løkke Rasmussen’s path to the prime minister’s office will be much easier.
5. Yahya Hassan Kashif Ahmad and Yahya Hassan of the National Party. Photo: Simon Skipper/Scanpix
While The Alternative was able to pass the necessary 20,000 verified signatures that are needed to earn a place on the ballot, another party vying for inclusion ran out of time. When Helle Thorning-Schmidt called for an election on June 18 rather than waiting until after the summer holiday, she effectively killed the National Party’s chances to collect enough signatures on time.
See also: Danish immigrant party challenges populist right
The party announced on Friday that they would drop their quest to obtain the required number of signatures to qualify for the ballot and instead focus on running a handful of candidates as independents. While independents typically stand little chance of getting voted in to parliament, the National Party has a major trick up its sleeve in the form of Yahya Hassan.
The 20-year-old poet turned political hopeful packs plenty of star power and if he can translate that popularity into votes, he has the ability to really shake things up in Christiansborg with his outspoken and often confrontational style.
6. Johanne Schmidt-Nielsen Johanne Schmidt-Nielsen. Photo: Thomas Lekfeldt/Scanpix
The timing of the election may have cut the National Party's chances short, but it extended the political life of Johanne Schmidt-Nielsen.
One of the most recognizable faces in Danish politics, Schmidt-Nielsen is beloved by the left wing and is the de facto leader of the officially leaderless Red-Green Alliance (Enhedslisten).
The party has a rotation principle that ensures that a party member cannot run in a parliamentary election if they have already been in Christiansborg for seven years.
The 31-year-old Schmidt-Nielsen has been an MP since November 2007 and at its annual meeting earlier this year, Enhedslisten set a cut-off date that would have meant that their biggest star would have sat on the sidelines if Thorning-Schmidt had waited much longer to call the election.
Luckily for them, the PM pulled the trigger just eleven days before Schmidt-Nielsen would have been disqualified by party rules. Her personal appeal can’t be denied: in the 2011 elections, Schmidt-Nielsen received the second-highest number of personal votes behind just Lars Løkke Rasmussen.
7. Can the Social Liberals survive without ‘Queen Margrethe’? Economy and Interior Minister Morten Østergaard. Photo: Thomas Lekfeldt/Scanpix
With former party leader Margrethe Vestager now off battling Google from her office in Brussels, the Social Liberals (Radikale) have fallen dramatically in opinion polls under her replacement, Morten Østergaard.
Vestager was such a well-respected and cunning politician that many often wondered just who was running the government coalition.
Østergaard, however, “has simply not delivered the goods” according to political analyst David Trads and without Vestager around, Radikale has seen the 9.5 percent it received in the 2011 election fall to around six percent.
With a lot of those voters fleeing to opposition parties Venstre and Liberal Alliance, a weakened Radikale could be what keeps Thorning-Schmidt out of office for a second term.
8. How ugly will it get?

Image: Socialdemokraterne
Danish political campaigns are usually rather civil when compared to the attack ads that dominate American politics. But that changed earlier this month when the Social Democrats rolled out a national campaign that attacked Venstre’s Rasmussen not for his policies but for his personal scandals.
Rasmussen spent much of 2014 embroiled in controversy for first-class flights, pricey clothing bought by party money and allegations of extensive alcohol bills on ministerial flights when he was in power.
The Social Democrats went right after that weakness in a campaign asking “who should pay Løkke’s bills”, featuring an unflattering photo of Rasmussen in front of a massive pile of reciepts.
While this might seem like fair game in other countries, Politiken editor Poul Aarøe Pedersen called the campaign a “sad low point”. With still well over two weeks to go before election campaign, could things go lower?
9. Will the People’s Meeting just be a gathering of extremists? Geert Wilders. Photo: Mike Stone/Scanpix
The 'People's Meeting' (Folkemødet) has been getting a lot of attention for the controversial guests – including Geert Wilders, a host of European nationalistic parties and Mohammed cartoons – that are coming, but it may soon be about who is staying away.
While all of the party leaders will undoubtedly still make the journey to Bornholm, lesser-known names fighting for a seat in parliament may decide that their time is better spent shaking hands and kissing babies in Randers and Herning than it is making the rounds of the political tents in Allinge. After all, all politics is local and even in a tiny country like Denmark the relatively remote island of Bornholm will seem very far away mere days before Danes go to the ballot box.
10. Could the loser again be the winner? Helle Thorning-Schmidt casts her vote in the 2011 election, which she both won and lost. Photo: Erik Refner/Scanpix
With so many uncertainties on both sides, there is no guarantee that the party that has the best result on June 18 will come to power.
One need only look at the results of the 2011 election, in which Venstre came out on top but lost power while the Social Democrats took the prime minister’s office despite losing a seat in parliament.
In the early days of the campaign, rifts between coalition parties are beginning to surface and uncovential alliances are forming around some key issues, including a reform of the unemployment benefit scheme known as dagpenge.
When the votes are tallied up, there may need to be a long hard round of horsetrading and negotiations for either side to find a coalition that adds up to 90 mandates. A party with the most seats in parliament could end up on the outside looking in, as Venstre is now, while a smaller party like Liberal Alliance or Alternative could use their election performance to open a back door into ministerial offices.