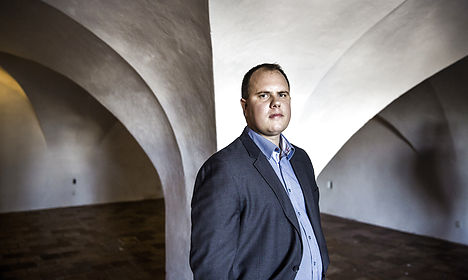 Martin Henriksen of the Danish People's Party is one of the consistent anti-immigration voices. Photo: Thomas Lekfeldt/Scanpix
“Unwanted” and “uncivilised” — foreigners are sometimes shocked by the blunt tone of Denmark's debate on Muslim immigration, and with a general election around the corner politicians show no sign of toning it down.
“There's no way you can integrate with all this rhetoric because people think you're a criminal or a freeloader,” said Kelly Draper, a British-born teacher who came to the Scandinavian country seven years ago.
“The last time I watched the Danish news… they had four main stories and three of them were about how immigrants were ruining everything,” she added.
Prime Minister Helle Thorning-Schmidt on Wednesday called an election for June 18, and 10 years after daily Jyllands-Posten published the Mohammed cartoons that sparked lethal protests in some Muslim countries, immigration and Islam remain at the top of the agenda.
The opposition right-wing bloc is currently leading the polls, but even if it does well in the election it would need the support of the anti-immigration Danish People's Party (DF) to pass legislation in parliament.
Like its peers in other European countries, the party regularly makes comments that some find offensive and even racist, but the level of hyperbole and vitriol is what takes foreigners by surprise.
“I'm Jewish so I always tell [Danes], you just take the word Muslim, switch it out with Jewish and you've got Germany of the 1930s,” said David Miller, an American expatriate living in Copenhagen.
DF lawmakers have likened the Muslim veil to the swastika, the Koran to Mein Kampf and argued that Islam is “the greatest threat to our civilisation”.
Former party leader Pia Kjærsgaard claimed immigrant-heavy parts of Danish cities were “populated by people from a lower level of civilisation.”
Echoing that sentiment, Anders Vistisen, a Danish member of the European Parliament, last year described population growth in Muslim countries as “humanity's greatest challenge.”
“About the Jews' situation in Europe: The Muslims continue where Hitler left off. Only the treatment Hitler got will change the situation,” former parliamentarian Mogens Camre, who now serves as a councillor in a Copenhagen suburb, wrote on Twitter last year.
'Unwanted guests'
DF's role in Danish politics has arguably made it the most influential party of its kind in Europe, and with some polls giving it one in five votes amid rising numbers of refugees from Syria, its power shows no sign of waning.
The party was allowed to shape Danish migration policies into some of Europe's toughest in exchange for supporting in parliament Danish governments between 2001 and 2011.
It is unclear if it will seek to join a future right-wing government, which observers say would limit its ability to U-turn on controversial issues when public opinion changes.
Over time, voters have found it harder to distinguish between DF's views and those of the main right-wing party, Venstre.
In an op-ed titled “Happy Eid to all Muslims!”, a leading Venstre MP last year suggested selecting immigrants based on their religion.
“There are big differences in the ability and willingness for integration depending on whether it is a Christian American or a Swede or a Muslim Somali or Pakistani who comes here,” Inger Støjberg wrote in Berlingske.
See also: Denmark: The land of no entry (for Muslims)
In the 2011 election, the ruling Social Democrats campaigned on rolling back some of the immigration policies introduced by the previous government, but after losing voters to DF it too has changed its message.
In October, its spokeswoman on immigration came under fire for describing refugees as “unwanted guests, no matter how you look at it.”
In March, a new campaign poster showed the Social Democratic prime minister next to the slogan: “If you come to Denmark you should work”, referring to the relatively high unemployment rate among immigrants.
Soul searching
In the wake of February's twin attacks in Copenhagen by gunman Omar El-Hussein, many Danes asked themselves how a young man born and bred in their country could have felt so alienated from the society in which he lived.
See also: Copenhagen shooting: From petty criminal to cold-blooded killer
Some people, mostly on the left, argued that the national conversation on Islam had made it harder for Muslims to integrate.
Even before the attacks a December poll found that 44 percent of Danes were “sometimes ashamed of the Danish immigration debate”, while one in three Danish Turks said they had considered leaving the country because of it.
It's unlikely to convince DF's spokesman on immigration issues, Martin Henriksen, who once described Islam as “a terrorist movement” but who now prefers the term “an ideology of conquest”.
“There are some people who think it's offensive if you say that 20 percent of those in Danish prisons come from a Muslim background,” the lawmaker, who represents a working class constituency outside Copenhagen, told AFP in his office in the Danish parliament.
“But it's just a fact, it's reality, and then I think you should just say it and have a debate based on that,” he added.