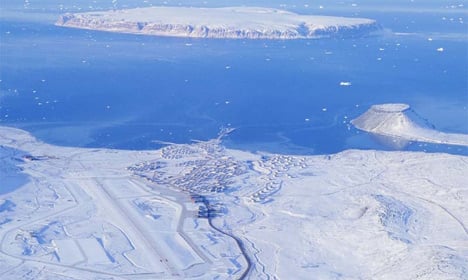 Aerial view of Thule Air Base. Photo: Public Domain/WikiCommons
The Court of Federal Claims has told the US Air Force that it cannot move forward on a 2.4 billion kroner ($360m) maintenance contract at the Thule Air Base awarded to Exelis Services A/S, a subsidiary owned by the US firm Vectrus.
The court said that Exelis did not live up to the criteria of the bidding process and that the contract should be put to tender again, the Greenlandic Broadcasting Corporation (KNR) reported on Thursday.
The contract for the upkeep and operation of the base, which is the US Air Force’s northernmost outpost, was awarded to Exelis last year. That decision came despite complaints from both Greenland and Denmark that handing the contract to an American firm would lead to a costly loss of jobs in Greenland.
Prior to the decision to give the job to Exelis, maintenance of the Thule Air Base had been under Greenlandic or Danish control since the 1950s, providing jobs and valuable work training to residents of the densely populated autonomous nation.
Controversy over the decision led Danish Foreign Minister Martin Lidegaard to call on the United States to suspend the public tender process, a request initially turned down by the Americans.
See also: Denmark asks US to put brakes on Thule bid
But KNR wrote that the Court of Federal Claims has now ruled that Exelis did not live up to the bidding requirements, which means that the lucrative contract will once again go to tender.
The court decision came in response to a complaint from Greenland Contractors A/S. Copenhagen Arctic A/S also filed a complaint with the court.
“We are of course initially satisfied that there was a ruling in our favour on our contention – that Exelis Services A/S did not fulfill the criteria to get the contract. So as a starting point, we are satisfied. Now we’ll have to see what else might happen,” Greenland Contractors director Peter Kofoed told KNR.
In 2013, the Danish government was warned that its agreement about control of the base might be in violation of EU law. The government then decided to put the contract up for tender and Exelis was chosen for the seven-year contract, which was supposed to begin on October 1.
For now, maintenance of the US Air Force base will remain the responsibility of Greenland Contractors.