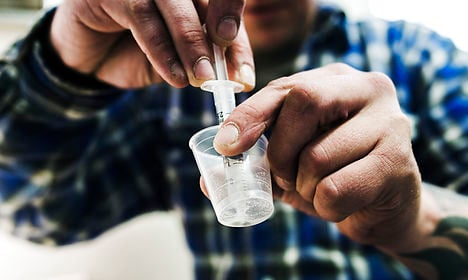 The injection rooms allow some 4,300 users to get their fix in controlled environments. Photo: Johnny Anthon Wichmann/Scanpix
The country’s five injection rooms – located in Copenhagen, Odense and Aarhus – allow drug users to get their fix in controlled environments and under the watchful eye of healthcare professionals.
According to a Health Ministry report released on Wednesday, heroin and other drugs have been injected by around 4,300 registered users some 355,255 times since the rooms opened in 2012. The vast majority – 94 percent – of injections took place in Copenhagen.
In 301 instances, the drug user overdosed but thanks to the presence of the rooms’ personnel there was not a single death.
“On that background, the evaluation concludes that the injection rooms must be seen to limit the risk of death and injuries,” a Health Ministry press release read.
The report also stated that the injection rooms have helped health professionals come in contact with addicts that they would not otherwise reach if the drug use remained on the streets. There were 354 instances in which a user asked for help in breaking their habit.
According to the evaluation, it is not just users who have benefited from the injection rooms.
“Also the residents in those areas where drug abusers hang out and used to take their drugs in the streets, stairwells and hallways have noted that there aren’t as many used needles [lying around],” the ministry release stated.
The volume of used needles in the Copenhagen district of Vesterbro has fallen by nearly 80 percent since the nation’s first injection room was opened there in the autumn of 2012.
The Danish Health and Medicines Authority (Sundhedsstyrelsen) said last year that the injection rooms deserve the lion’s share of the credit for the fact that drug-related deaths have reached their lowest level in nearly 20 years.