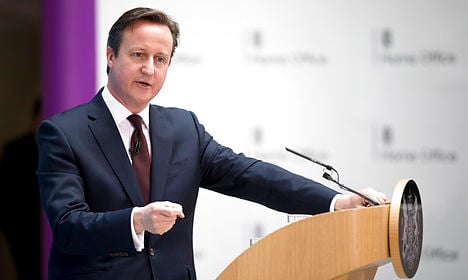 David Cameron wants to meet with all 27 EU leaders before the end of next month. Photo: Matt Dunham/Pool/Scanpix
British Prime Minister David Cameron cancelled a visit to Denmark planned for Thursday at the start of a European tour after Danish Prime Minister Helle Thorning-Schmidt called a general election for June 18.
“The prime minister will no longer travel to Copenhagen tomorrow for talks,” a spokesman for Cameron's Downing Street office said in a statement on Wednesday after the announcement in Denmark.
“The prime minister's programme will start in the Hague at lunchtime and then continue as planned.”
After the Netherlands, Cameron is also expected in France on Thursday and will travel on to Poland and Germany on Friday for talks on the EU reforms he is seeking ahead of a referendum on Britain's membership by the end of 2017.
His aim is to talk to all other 27 EU leaders before a European Council summit at the end of next month, outlining planned reforms such as curbs on immigration to Britain.
Thorning-Schmidt is married to Stephen Kinnock, the son of a former leader of Britain's Labour and a newly-elected member of parliament for the same centre-left party, which is opposed to Cameron's Conservatives.