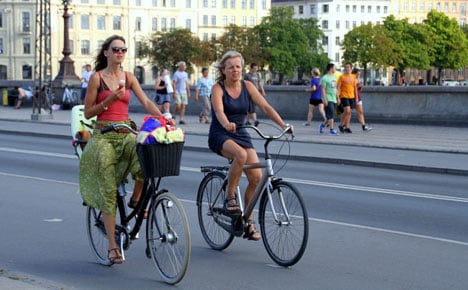 Tank-tops and ice cream? Yes, please. Photo: Colourbox
When is it going to come? Is this week finally the week?
For quite some time now, nearly everyone in Denmark has been asking these questions and now we finally have the answer. No, we’re not talking about the election to determine who will control Danish politics for the next four years. We are talking about something much, much more important: summer weather.
As a colder-than-normal May winds to a close, meteorology institute DMI said on Tuesday that the long-awaited summer warmth is now just around the corner.
In the first week of June, DMI says we’ll have summer weather that actually feels like it’s supposed to and “the sun will take control”.
“Warmer air will stream in over Denmark from the southwest and from the middle of week 23 [June 1-7, ed.], temperatures can likely rise to around 20 degrees. Approaching the weekend of June 6-7, we can have daytime temperatures up between 20-25 degrees and night temps between 10-15 degrees,” DMI’s monthly prognosis reads.
The following week sounds even better, with DMI calling for “stable, summer-like weather” that will be “primarily warm and sunny”.
Getting into the third week of June, DMI cautions that its prognosis is more uncertain. If a high-pressure system moves away from Denmark and a low-pressure system moves in from the south it could bring unstable weather conditions and cause daytime temperatures to drop down to between 15-20C, but the meteorologists say that the high-pressure system may stick around. In that case, Denmark can look forward to the dry and sunny weather sticking around, with temperatures between 20-25C and a chance of them climbing even higher.