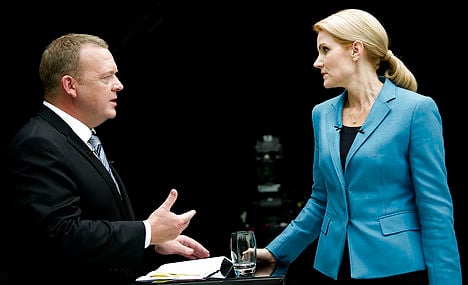 Will Lars Løkke Rasmussen and Helle Thorning-Schmidt be duking it out this time next week? Photo: Keld Navntoft/Scanpix
The election rumours that have been flourishing in Denmark for months have now reached a fevered pitch.
Several political analysts wrote over the weekend that PM Helle Thorning-Schmidt is likely to call for an election this week, which represents the last real chance to kick off a three-week election cycle before Danes leave in droves for summer holidays.
“Helle Thorning-Schmidt will probably call the general election next week although the final decision has not been taken yet,” an anonymous source with close relations to the PM told international news bureau Reuters on Friday.
Those who argue that the timing is right say that Thorning-Schmidt’s government has already rolled out all of its major proposals, that the election has already been unofficially underway for months now anyway and that the Social Democrat PM simply can’t afford to risk something happening over the summer holiday that would put her centre-left coalition even further behind in the opinion polls.
While the PM’s party and its allies continue to get drubbed in the polls – a Voxmeter poll from the weekend put the opposition bloc at 54.5 percent support to the PM's side's 45.2 percent – Thorning-Schmidt has seen her personal popularity steadily rise when pitted against opposition leader and former PM Lars Løkke Rasmussen.
Adding grist to the rumour mill, Thorning-Schmidt announced a Tuesday morning press conference in which she and Economy Minister Morten Østergaard plan to present the government’s plans for welfare investments over the next four years.
Those plans, aimed at the health and elder care areas, are seen as a definitive way for the prime minister to pit her message of public investments against the opposition’s pledges to freeze public sector growth.
Under Danish rules, it is solely up to the prime minister to set an election date as long as it is done within four years. Once the prime minister calls for the election, Danes will go to the polls within three weeks. That makes Tuesday, June 16th the current favourite for election day.
The absolute latest that an election can be held is September 14, so if Thorning-Schmidt doesn’t pull the trigger this week the date will still in some ways be set as everyone will know that the election will come shortly after the conclusion of the summer holidays.