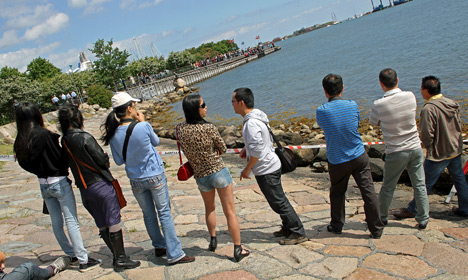 Tourists approach the Little Mermaid at Langelinie. Photo: Colourbox
According to figures from the tourist organization Visit Copenhagen, there was a ten percent increase in overnight stays in the Danish capital through the first quarter of 2015 when compared to the same period last year.
Copenhagen played host to some 1.54 million overnight stays in January, February and March – 140,000 more than in the first quarter of 2014.
“Ten percent growth in the year’s first quarter is a good result, particularly seen in light of the fact that 2015 is the sixth consecutive year of progress for tourism in the capital,” Wonderful Copenhagen’s communications director, Emil Spangenberg, said on the organization’s website.
The overnight stays were particularly boosted by a 29 percent increase in Chinese tourists. The first quarter of 2015 also saw 15 percent more Norwegian tourists, nine percent more Dutch and eight percent more from the UK.
The positive figures for Copenhagen come after the World Economic Forum’s Travel & Tourism Competitiveness Report earlier this month ranked Denmark as just the 27th best country for tourism, down significantly from its 16th place ranking in the 2011 index.
In April, the Danish magazine Momentum released a study of European tourism growth between 2004-2014 and concluded that Denmark performed the fifth worst of the 48 Organization for Security and Co-operation in Europe (OSCE) countries over that time span.