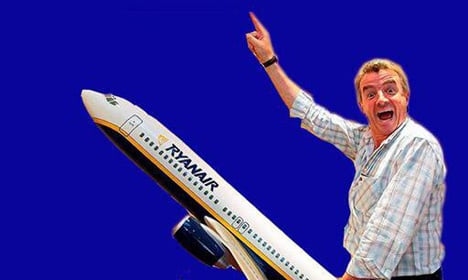 Flame wars. Image: Peter Hummelgaard/Twitter
The folks in Ryanair’s marketing department aren’t the only ones to have completed a Photoshop beginners’ course.
After the budget Irish airline went after Copenhagen Mayor Frank Jensen in a pair of tweets, Jensen’s political allies have struck back.
See also: Ryanair strikes back at Copenhagen's mayor
Fellow Social Democrat Peter Hummelgaard wrote that “Ryanair has for the past few days attacked Frank Jensen with vulgar ads. We have made an equally vulgar response” and posted a photo of Ryanair CEO Michael O’Leary fornicating with one of his jets:

Karina Lorentzen, an MP for the left-wing Socialist People’s Party, also threw herself into the flame war. She tweeted a direct response to Ryanair’s Marie Antoinette ad by placing O’Leary’s face on the former French queen’s body and having him declare “Let me keep my royal salary [and] let my staff work under… less royal conditions!”:

Ryan Air -“You want war? We get you war!” Don´t mess with our unions 🙂 pic.twitter.com/KbtmYuN8ac

“You want war? We get you war! Don’t mess with our unions,” Lorentzen warned.
The tweets from both Hummelgaard and Lorentzen were shared by several other politicians.
Ryanair's initial swipes at Jensen came in response to Jensen’s announcement on Sunday that he will not allow municipal employees to fly with Ryanair on official business, even if the airline offers the lowest available fare.

See also: Copenhagen mayor takes on Ryanair
“The City of Copenhagen does not accept social dumping. Therefore we don’t use firms like Ryanair or others that don’t offer their employees proper salaries and working conditions,” the mayor wrote on Facebook.
“Our rules mean that we cannot enter contracts or buy goods from suppliers that do not pay proper salaries,” Jensen told Berlingske.
Ryanair spokesman Ronan O’Keeffe said that Jensen’s decision gives preferential treatment to SAS, the Scandinavian airline partly owned by the Danish state. O’Keeffe added that Jensen is misinformed about Ryanair’s working conditions.
“We are surprised by Mayor Jensen’s imprecise comments which don’t take into consideration the fact that Ryanair’s pilots and cabin personnel have high salaries, job security and already have a collective agreement with Ryanair,” he told Berlingske.
Ryanair attempted to drive home that message with a more understated tweet on Thursday:

The municipalities of Albertslund, Ballerup, Brøndby, Hvidovre, Ishøj, Ringsted, Roskilde and Tårnby have also declared that employees can only fly with airlines that have Danish collective bargaining agreements.
On Wednesday, the Danish Labour Court (Arbejdsretten) set a date of June 15th for a final decision on whether Danish labour unions can carry out a legal strike against Ryanair at Copenhagen Airport.
If the court determines that Ryanair is subject to Danish labour laws, it clears the way for a legal strike. If however the court rules that the airline should play by Irish rules, a strike would be illegal.