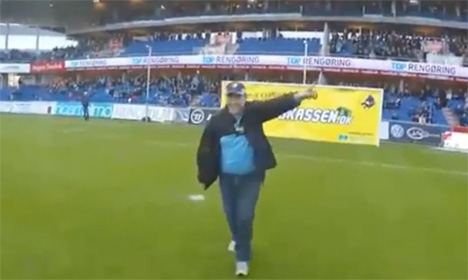 Michael Hansen celebrates his winning shot. Screenshot: Vidme
Danish football fan Michael Hansen left Thursday’s game between Randers and Hobro 100,000 kroner ($15,000) richer than he came.
Hansen was picked to take part in an on-field contest during a break in the action. He expertly kicked the ball through a small hole in the upper corner of the goal to win the prize money.
See the 100,000 kroner kick here: