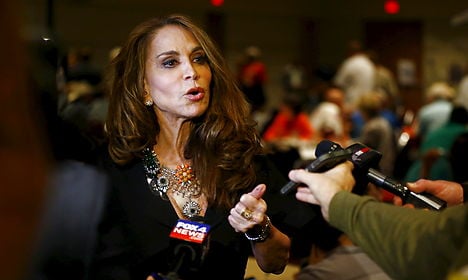 The Mohammed drawings that were part of controversial American blogger Pamela Geller's event last month will be displayed on Bornholm. Photo: Mike Stone/Reuters/Scanpix
The People’s Meeting (Folkemødet) on Bornholm grows more controversial by the day.
After the uproar surrounding the invitation to Dutch politician and prominent Islam critic Geert Wilders, it was announced that a host of European nationalists will attend at the invitation of the far-right Danes’ Party (Danskernes Parti).
See also: Denmark's 'People's Meeting' gets new feel
On Tuesday, the anti-Islam groups Stop the Islamization of Denmark (Stop Islamiseringen af Danmark – SIAD) and Frit Danmark said that they would also be at Folkemødet next month and that they would be bringing drawings of the prophet Mohammed with them.
“We are doing it for free speech, which is under attack by jihadists and because you cannot have degrees of free speech,” SIAD’s chairman, Anders Gravers Pedersen, said in a press release.
See also: Nationalists coming to Denmark's Folkemødet
The groups plan to display the drawings that were part of the Mohammed Art Exhibit and Contest event in Texas earlier this month. Two gunman opened fire at the event, which was organized by Islamic critic and blogger Pamela Geller and attended by Wilders, but were shot and killed by police. The terror group Isis has claimed credit for the attack.
Frit Danmark said that should the drawings' display at Folkemødet lead to any confrontations, they are ready to defend themselves with “by any means necessary ”.
“If a situation should occur in which we don’t have sufficient security, we will need to take action with vigilantism,” the group’s chairman, Michael Ellegaard, told Jyllands-Posten.
Url copied to clipboard!