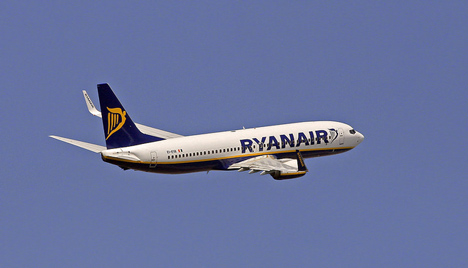 Photo: Victor/Flickr
Copenhagen Mayor Frank Jensen will not allow the City of Copenhagen’s roughly 45,000 employees to use budget airline Ryanair for official travel, he announced on Sunday.
Jensen said that the wages the airline pays and its lack of a Danish collective bargaining agreement mean that his employees cannot book their tickets through Ryanair, even if they are the cheapest option.
“The City of Copenhagen does not accept social dumping. Therefore we don’t use firms like Ryanair or others that don’t offer their employees proper salaries and working conditions,” Jensen wrote on Facebook.
In an interview with Berlingske, the mayor said that the ban on flying with Ryanair is a continuation of Copenhagen’s policies.
“Here in Copenhagen we have fought hard against the scourge of social dumping. Therefore we require all of those who deliver services to the municipality, including those who would sell us plane tickets, to offer their employees proper salaries and working conditions,” he said.
“Thus, we already have a ban on flying with Ryanair. Our rules mean that we cannot enter contracts or buy goods from suppliers that do not pay proper salaries,” Jensen continued.
Ryanair spokesman Ronan O’Keeffe said that Jensen’s decision gives preferential treatment to SAS, the Scandinavian airline partly owned by the Danish state. O’Keeffe added that Jensen is misinformed about Ryanair’s working conditions.
“We are surprised by Mayor Jensen’s imprecise comments which don’t take into consideration the fact that Ryanair’s pilots and cabin personnel have high salaries, job security and already have a collective agreement with Ryanair,” he told Berlingske.
But Jensen is not alone in his decision to ban travel with the Irish airline. The municipalities of Albertslund, Ballerup, Brøndby, Hvidovre, Ishøj, Ringsted, Roskilde and Tårnby have also declared that employees can only fly with airlines that have Danish collective bargaining agreements.
Ryanair’s entry into Copenhagen has been a drama-filled affair. The airline and Danish labour unions have been in a war of words since Ryanair announced its intentions for a Copenhagen base in October 2014.
Ryanair and the Danish Confederation of Trade Unions (LO) will meet each other in the Danish Labour Court (Arbejdsretten) later this week to determine whether the airline should operate under Irish or Danish rules from the Copenhagen base.
LO said that if the so-called ‘recognition proceedings’ determine that Ryanair must follow Danish rules, the decision will clear the way for a blockade that would bar members of unions including 3F, Dansk Metal and HK from doing work for Ryanair, thus effectively making it impossible for the company to operate out of Copenhagen Airport.
In a new YouGov opinion poll carried out for Berlingske, Danish consumers reported holding an overwhelmingly negative view of Ryanair, but the airline’s tickets have been selling briskly since its entry into Copenhagen.
Last month, Ryanair announced that it will expand its Copenhagen operations to include new direct flights to Budapest, Malaga and Alicante.