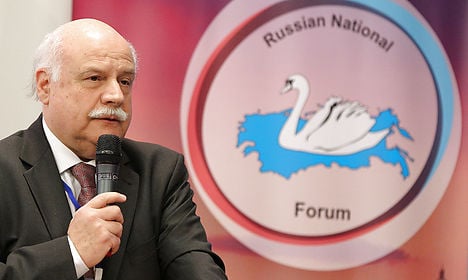 Greek ultra-nationalist Georgios Epitideios, an MEP for Golden Dawn, will speak at Folkemødet. Photo: Ruslan Shamukov/Scanpix
The nationalist Danes’ Party (Danskernes Parti) said on Friday that it would be participating in this year’s People's Meeting (Folkemødet) and will be bringing along several of their far-right colleagues from across Europe.
The Greek nationalist party Golden Dawn has already accepted an invitation and will send MEP Georgios Epitideios to represent them if Folkemødet organizers approve a debate on nationalism. An answer is expected on Monday.
Golden Dawn has been widely branded a neo-Nazi and racist party and some of its members have been accused of violence and hate crimes. The party also has a long history of violent clashes with left-wing parties. The party's offices have been bombed on four occasions, two Golden Dawn members were shot dead outside of party offices in suburban Athens in 2013 and a man connected to the party murdered a Greek hip-hop artist and activist that same year.
The party's leader Nikos Michaloliakos and other Golden Dawn lawmakers are currently on trail, accused of running a criminal organization.
The leader of the Danes’ Party, Daniel Carlsen, told broadcaster DR that he has also invited representatives from the Italian nationalist party New Force (Forza Nuova) and French nationalists  l'Oeuvre française to join.
All four parties are part of the pan-European Alliance for Peace and Freedom.
“We are nationalists and we work together to restore Europe with free, sovereign and ethnically and culturally homogenous nations. The greatest challenge is the demographic change. This population change I think can rightly be called a genocide against indigenous Europeans,” Carlsen told DR.
See also: Denmark's 'People's Meeting' gets new feel
The nationalists’ participation at Folkemødet comes at a time when many were already expressing concerns that the involvement of Dutch politician Geert Wilders, a well-known Islam critic, would greatly alter the spirit of the event, which has been held every June since 2011.
Folkemødet’s creator, Bertel Haarder, said he wasn’t exactly thrilled that the far-right parties would be present on Bornholm.
“Golden Dawn are a bunch of lunatics in the vein of Geert Wilders and Islamists. But there is no way that we can censor who comes to Folkemødet. It is an open place for debate where anyone can rent space and they are apparently doing that,” Haarder told Berlingske.
Wilders’s participation had already led to an increase of security at the event and some politicians expressed concerns that the presence of Golden Dawn would completely alter the spirit on Bornholm.
“We need to discuss whether we should make space for those whose only goal is to provoke and to pit certain sections of the population against each other and preach hate,” the Socialist People’s Party’s Özem Cekic told DR.
Nielsen, however, dismissed the idea that Golden Dawn would cause trouble on Bornholm and said that to deny their participation “would just underscore the fact that we live in a place that does not take freedom of speech seriously”.
On Friday it was also announced that the Danish branch of the anti-Islamist Pegida movement would also participate in Folkemødet, which runs June 11-14.
Url copied to clipboard!