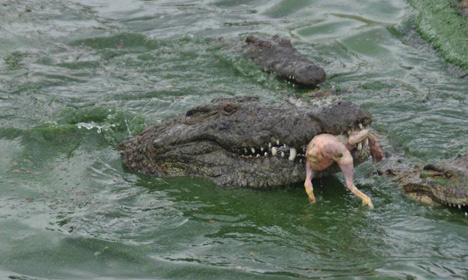 Sobek with his preferred meal - plucked chicken. Photo: René Hedegaard
A 35-year-old, five-metre long, 600 kilo crocodile is on its way to Denmark after the head of the Crocodile Zoo on the island of Falster has agreed to rescue it from South Africa.
The jumbo croc, named Sobek, is a breeding male at an animal park north of Johannesburg but with his breeding duties just about over, his life is now in danger from big game hunters.
After raising 100,000 kroner, René Hedegaard from the Crocodile Zoo will travel to South Africa next week with a TV crew in tow to bring Solbek to the island of Falster.
“I’ve been aware of problem crocodiles like Sobek for years. Just some 200 years ago when the human population was more than ten times lower than its is now, giant crocs could live a good life as they have done for nearly 200 million years. It’s sad that the planet has become so over populated that there’s no space anymore for the amazing giant crocodiles,” Hedegaard told The Local.
'I’ve always liked the idea of getting one of the giant crocodiles that really doesn't fit in anymore here to the Crocodile Zoo,” he added.
Sobek is expected to arrive at the Crocodile Zoo on May 29 and when he does, it will be something special for the park's 40,000 annual visitors.
“He will be not only the biggest crocodile in Denmark, but one of the biggest in all of Europe”,” Hedegaard said.
Crocodiles have roughly the same life span as humans, so Sobek should have plenty of years left to enjoy Denmark.