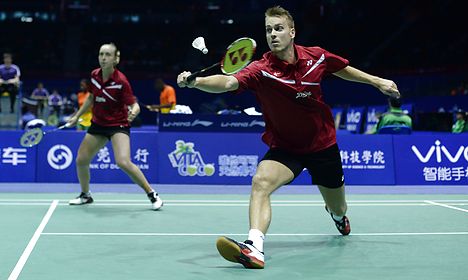 Denmark's Mads Pieler Kolding (R) and Sara Thygesen (L) play against Japan's Kenta Kazuno and Ayane Kurihara during their mixed doubles quarter-final match at the 2015 Sudirman Cup. Photo: Wang Zhao/A
Denmark put up a spirited fight but fell 2-3 after Line Kjaersfeldt and Sara Thygesen fell to Japan's top-seeded Misaki Matsutomo and Ayaka Takahashi in the final match that lasted an hour and three minutes with a score of 21-19, 7-21, 19-21.
“I'm very happy about it,” Matsutomo told AFP after winning the match in the southern Chinese city of Dongguan. Japan had lost in the same event two years ago.
“We felt like we actually had them in the third game,” Thygesen told reporters, adding that a few mistakes caused the loss.
In the men's singles, Japan's rising star Kento Momota wowed the crowds with his strong play in the first game against Denmark's Viktor Axelsen, but fell in the second game.
Axelsen, however, crumbled in the third game losing 15-21, 21-17, 9-21.
“I wish I could be a star like Lee Chong Wei,” Momota said when asked by AFP if he will one day take over the reins as one of the world's top badminton players.
“I want to be a player like him, a player that's loved by everyone and is really popular,” the 20-year-old, who won his first Superseries title in Singapore in April, said.
Former world-number-one Lee, who along with the rest of the Malaysian team was eliminated in Thursday's quarter-finals by South Korea, was playing his first event since receiving a backdated, eight-month ban for accidentally ingesting a banned anti-inflammatory.
Denmark trailed Japan 1-2 after Line Kjaersfeldt lost to Nozomi Okuhara 12-21, 8-21, but stayed alive in the clutch men's doubles match.
Danish duo Mads Pieler Kolding and Kim Astrup held their own in a tight first game against Japan's Hiroyuki Endo and Kenichi Hayakawa.
They powered through in the second game and won 21-19, 21-15 to cheers of support from the crowd.
“We're very relieved,” Kolding told AFP after the match. “To go in there today and beat good Japanese players is very satisfying,” he said.
Denmark, Europe's top team, arrived in disarray after five top players were kicked out last month in a row over sponsorship by rival cookie companies.
Mathias Boe, Carsten Mogensen, Joachim Fischer Nielsen, Christinna Pedersen and Kamilla Rytter Juhl, who are sponsored by Kjeldsen Cookies, are at odds with Badminton Denmark since it signed a deal with Danisa Cookies.
Kolding and Astrup had no comment on the issue.
Indonesia finished off Taiwan in the quarter finals winning 3-1 with Christie Jonatan beating higher seeded Hsu Jen Hao 21-12, 13-21, 21-16 in one hour and six minutes in the men's single showdown after Indonesia's Bellaetrix Manuputty fell to Tai Tzu Ying.
Tournament favourites China will face Indonesia in the semi-finals Saturday with Japan set to square off with South Korea.