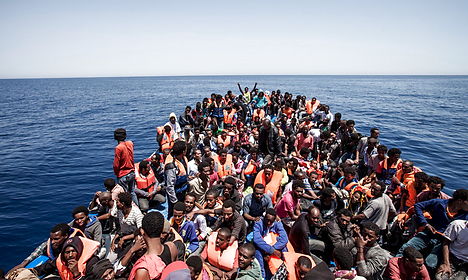 Migrants crowd the deck of their wooden boat off the coast of Libya on Thursday. Photo: REUTERS/MOAS/Jason Florio/Scanpix
The European Commission’s plan to implement a quota system for a more balanced acceptance of refugees across the EU is being hotly debated across the continent. Countries like Sweden and Germany that take in a disproportionate number of refugees have endorsed the proposal, while the UK and others have signalled their strong resistance.
Denmark, due to its opt-out on EU Justice and Home Affairs, would not be included in the plan but that doesn’t mean that it isn’t being heavily debated here.
In an interview with Politiken published on Friday, Foreign Minister Martin Lidegaard said it was “very sad” that Denmark’s opt-out will keep it out of the EU’s shared solution to the migrant crisis.
“In Denmark we have had a debate about the EU that makes it so that we need to underline the fact that this entire area is something that we will absolutely not leave to the EU. But at the same time, it is plainly obvious that in this situation it would be in Denmark’s interest to do it,” Lidegaard said.
Per capita, Denmark took in the sixth highest number of asylum applications in 2014 and the European Commission’s plan would force countries that take in far fewer refugees than Denmark to heavily step up their contributions.

But with Denmark not included in the plan and the Danish political climate filled with EU-scepticism, asylum and immigration policies will continue to be set at a national level.
Danes have been promised a referendum on ending the nation’s EU Justice and Home Affairs opt-out and replacing it with an ‘opt-in’ model, but the five Eurocentric parties backing the plan have made it clear that they are for maintaining Denmark’s exemption on EU asylum and immigration policies.
Lidegaard said the looming referendum casts a long shadow over Denmark’s role in dealing with Europe’s mass influx of refugees. He, like many others, feels that if the referendum aimed to move asylum and immigration policies under the auspices of the EU, Danes would likely vote against ending the opt-out, which in turn would put the country on the outside looking in when it comes to law enforcement agency Europol and the European judicial cooperation agency Eurojust.
“I think that right now a prerequisite for winning a referendum on the opt-out is the decision we made [to keep asylum policies at the national level, ed.] and I stand by that. But at the same time I must say that I regret the decision,” Lidegaard said.
“It is clear that some things cannot be solved by member states. Denmark takes more refugees than the average and there are clearly countries in the EU that should take more refugees than they do today,” he added.
While Denmark’s opt-out to Justice and Home Affairs keeps it from the refugee distribution plan, its defence opt-out excludes it from the EU’s plan to undertake a military operation aimed at human smugglers operating in the Mediterranean.
There too Lidegaard said that Denmark would benefit from being involved.
“We are not going to be sitting at the table when they discuss what to do with these smugglers and what should be done if one is to undergo peacekeeping initiatives. Thus we have given up our vote on our own security,” the foreign minister told Politiken.
Lidegaard said it was “clear” that Denmark should turn its attention to ending its defence opt-out after the referendum on Justice and Home Affairs.
Denmark was granted four opt-outs from the 1992 Maastricht Treaty: defence; justice and home affairs; the maintaining of the kroner rather than the euro; and an opt-out on citizenship rules that was cancelled out by the Amsterdam Treaty that took effect in 1999.
Denmark last held a referendum on its relationship to the EU in 2000, when voters once again rejected the euro.