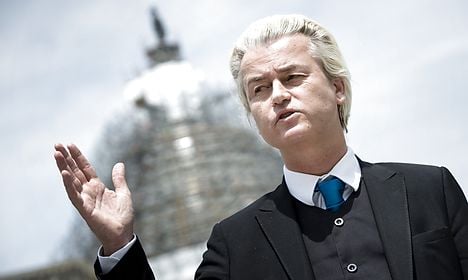 The presence of Islam critic Geert Wilders will mean more police – and fewer Danish politicians. Photo: BRENDAN SMIALOWSKI/Scanpix
For the fifth year in a row, the island of Bornholm will for four days in June be transformed into a veritable who’s who of Danish politics as it plays host to The People’s Meeting, or Folkemødet.
Last year, the island hosted 22,000 daily participants, 2,141 events and nearly 700 journalists for four days of speeches, debates and interaction between Danish citizens and their elected officials.
But this year’s version threatens to be a much different affair, largely due to the participation of Dutch politician Geert Wilders, an outspoken critic of Islam who just two weeks ago was part of a ‘draw the Prophet Mohammad’ event in Texas that was attacked by two armed gunman.
Wilders’s participation at Folkemødet, which comes at the invitation of the Danish Free Press Society (Trykkefrihedsselskabet), has already led to a handful of Danish politicians dropping out of the event and some Bornholm residents expressing safety concerns.
Bornholm Police on Thursday said that security at this year’s event will be significantly ramped up due to Wilders and recent terror attacks in Copenhagen and elsewhere.
“There will be more officers present during Folkemødet this year than in years past,” Bornholm Police Director Peter Møller Nielsen told Berlingske Nyhedsbureau.
“We have taken into consideration that something could happen during Folkemødet and we have also planned for prominent guests of various kinds that require extra security,” Nielsen added.
Wilders has confirmed his participation at the event and told Jyllands-Posten he plans to “talk about freedom of speech and Islam”.
The Danish Free Press Society, which is bringing Wilders to the event, paid tribute to Swedish cartoonist Lars Vilks in March, a month after he was the presumed target of the February 14 shooting at a Copenhagen cafe.
See also: PM on Copenhagen shooting: I was misinformed
The society also ruffled many feathers last autumn by hosting an exhibition of works by Malmö artist Dan Parks that had been banned by the Swedish state.
In an interview with The Local in October, the society's founder, Lars Hedegaard, said that free speech should always be defended “no matter the consequences”.
The 2015 Folkemødet will be held June 11-14. More information is available here.