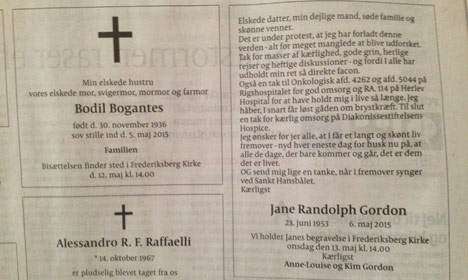 Gordon's obituary (right) as published in Politiken.
Jane Randolph Gordon was told in 2011 that her breast cancer had spread, so the Copenhagen native had time to come terms with her own death.
By the time the inevitable happened and Gordon died at age 61 on May 6th, she had also found the time to write her own obituary.
“Beloved daughter, my wonderful husband, sweet family and beautiful friends. It is under protest that I have left this world – far too much remained to be explored,” Gordon’s obituary began.
“Thank you for lots of love, good laughs, delightful travels and intense discussions – and for enduring my straightforward manner,” she continued.
Gordon went on to thank the folks at Herlev Hospital “for keeping me alive for so long” and expressed her hope that they would “solve the mystery of breast cancer” before encouraging those she left behind to live their lives to the fullest.
“I hope that all of you have a long and beautiful life from here on out – enjoy every single day and remember that all of those days that just come and go, those are the days that are life,” Gordon wrote.
She ended by asking her friends and family to send her a warm thought when they sing around the bonfire on Midsummer’s Eve, which would have been her 62 birthday. The obituary as published in Politiken.
Following its publication in the newspapers Berlingske and Politiken on Sunday, Gordon’s obituary has been widely shared on social media and her life has been the subject of numerous news stories.
Gordon’s daughter, Anne-Louise Gordon, told Berlingske that her mother prepared everything before her death.
“She wrote her own obituary and arranged who would speak in the church and what she would wear. She said: ‘I don’t want a normal obituary because it is under protest that I am leaving',” Anne-Louise Gordon said.
Jane Randolph Gordon’s husband Kim said that his wife ended her life as she lived it, always wanting to have the last word.
“I always asked myself: Is this discussion important? Nah, so she was always allowed to say the final sentence,” Kim Gordon said.
In this case, her last words touched touched and inspired legions of Danes whom she never met.
Gordon was buried at Frederiksberg Church on Wednesday but it's a good bet that she will be in the thoughts of many around Midsummer's Eve fires next month.